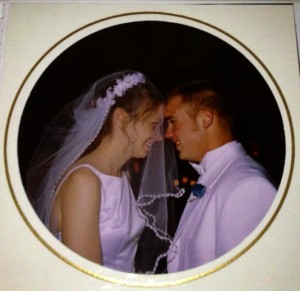 My Granny always said I was going to college to get my M.R.S. Degree. While I graduated with a teaching degree in 2004, I did, in fact earn the M.R.S. Degree when I married Nathan. I became Mrs. Tuley in May of 2002. Granny was able to witness that before her passing three months later.

It seems we’re always on an adventure of some sort, hence our new blog name, Adventures with the Tuleys!

Our first ten years of marriage include six different addresses, four children, and two years of owning a construction business. In 2012, we were prepared to embark on a new adventure, making plans to move to Dallas, Texas in order to join a global missions organization, Pioneer Bible Translators. We had hoped to move to Dallas in the summer of 2013. Little did we know that the adventure would look VERY different. The last three years have been a whirlwind of God’s provision and love. We are happy that despite the obstacles, we were able to join Pioneer Bible Translators full-time in June of this year!

We started the year 2012 with our four children, ages 7, 4, 18 months and 2 months. Grace was loving her 1st grade year at school, Samuel attended one day of preschool and I was at home with Ruth Ann and Josiah. Josiah learned to crawl at 6 months old, and walked at 9 months! Ruth Ann had become a little chatterbox and potty trained herself. Samuel learned to ride his bike without training wheels and Grace was quite the bookworm (and still is!). 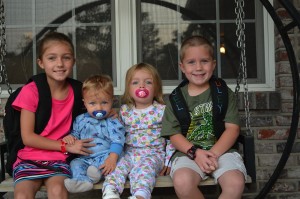 When school started up again in the Fall of 2012, like most families, we took a first day of school picture of our kiddos. It was in this picture that we noticed Josiah’s head tilt. We didn’t think much of it, other than it was pretty adorable.

Labor day weekend, I noticed Josiah’s left eye was moving around. It was like he was trying to focus on something, but couldn’t. I took Josiah to the eye doctor to get him checked out. The eye doctor didn’t seem too alarmed, and Josiah was diagnosed him with nystagmus, which is involuntary eye movement. She referred us to an ophthalmologist and recommended an MRI before that appointment. The MRI was scheduled for September 27th. I wasn’t too worried about it; nystagmus to me seemed like just an eye problem, similar to lazy eye or having crossed eyes; just less common. However, in most cases of nystagmus, both eyes will move around. Josiah’s movement was only in his left eye, something she had never seen before. An MRI was just to see why it was only occurring in one eye.

On September 27, 2012, Josiah, at only ten months old, was diagnosed with a brain tumor. He had surgery to remove the tumor less than a week later, on October 3. The surgery was expected to take 6-8 hours; it took 14. His hospital stay was expected to be 3-5 days. 26 days after surgery, Josiah moved out of the Pediatric Intensive Care Unit (PICU) and onto the regular floor. On October 30, after 28 days in the hospital, Josiah was finally able to go home.

The surgery was successful in removing 97% of the tumor, with the remaining 3% wrapped around a major artery and unable to be removed. Josiah suffered a stroke during the surgery leaving him unable to move his right side. His right leg was stronger than his arm, and Josiah was able to walk again (he was walking at 9 months old) before his first birthday. How many kids can say they learned to walk twice before they turned one? Josiah’s pituitary gland was also damaged during the surgery, causing several hormone deficiencies, which requires daily medication multiple times a day. The tumor placed pressure on his optic nerve, which caused loss of vision, leaving Josiah legally blind, although you’d never know it by watching him.

In January of 2013 a follow-up MRI showed the tumor was growing again, which led to chemotherapy. Josiah had 10 solid weeks of chemo, a 2 week break and an MRI in May 2013 that showed a small amount of tumor shrinkage. One port placement surgery, 32 additional chemotherapy treatments, 5 hospitalizations, 5 MRIs, 2 allergic reactions, and 15 ½ months later, Josiah was scheduled to complete his chemotherapy protocol on May 27, 2014.

The MRI in June 2014 showed that the tumor showed no growth (stable) and treatment was considered complete. Josiah had an MRI every 3 months for a year to monitor and watch for growth.

September 2014 MRI showed there was no evidence of recurrent tumor!

March 2015 MRI was good and Botox shots were given in his right arm to assist with physical and occupational therapy.

Currently, the tumor is stable and the next MRI is scheduled for December 2nd. Josiah continues with Occupational, Physical and Vision therapies. Pray that these would help him be able to utilize his right hand, gain strength on the right side, and work with his vision impairments. We will be evaluating his need for growth hormone in the coming months. Pray for us and the doctors to make the best decision for Josiah as we evaluate the benefits and risks involved. We appreciate your continued prayers for Josiah and our family.