On September 27, 2012,  Josiah, at only ten months old, was diagnosed with a brain tumor.  He had surgery to remove the tumor less than a week later, on October 3. The surgery was expected to take 6-8 hours; it took 14. His hospital stay was expected to be 3-5 days after surgery. 26 days after surgery Josiah moved out of the Pediatric Intensive Care Unit (PICU) and onto the regular floor. On October 30, after 28 days in the hospital, Josiah was finally able to go home. 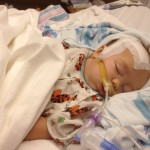 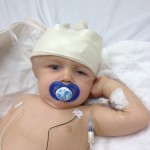 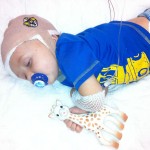 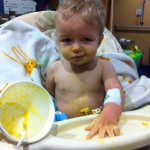 The surgery was successful in removing 97% of the tumor, with the remaining 3% wrapped around a major artery and unable to be removed. Josiah suffered a stroke during the surgery, leaving him unable to move his right side. His right leg was stronger than his arm and Josiah was able to walk again (he was walking at 9 months old) before his first birthday. How many kids can say they learned to walk twice before they turned one year old? Josiah’s pituitary gland was also damaged during the surgery, causing several hormone deficiencies, which requires daily medication multiple times a day. The tumor was putting pressure on his optic nerve, which caused loss of vision, leaving Josiah legally blind, although you’d never know it by watching him.

In January of 2013 a follow-up MRI showed the tumor was growing again, which led to chemotherapy. Josiah had 10 solid weeks of chemo, a 2 week break and an MRI in May 3013 that showed a small amount of tumor shrinkage. One port placement surgery, 32 additional chemotherapy treatments, 5 hospitalizations, 5 MRIs, 2 allergic reactions, and 15 ½ months later, Josiah was scheduled to complete his chemotherapy protocol on May 27, 2014.  The MRI in June  2014 showed that the tumor showed no growth (stable) and treatment was considered complete.

Josiah had to have an MRI every 3 months to monitor and watch for growth.  September 2014 MRI showed there was no evidence of recurrent tumor!  December 2014 MRI showed no evidence of disease.  March 2015 MRI was good and Botox shots were given in his right arm to assist with physical and occupational therapy. June 2015 and December 2015 MRIs also had good results and Josiah has had several Botox shots, which have helped him to utilize his right arm more.  Josiah’s MRIs then moved to every 6 months.

June 2016 MRI and December 2016 MRI both had good results as well!  Josiah continues with physical and occupational therapy, as well as language therapy for aphasia.  May 2017 MRI, January 2018 MRI, June 2018 MRI, February 2019 MRI and February 2020 MRI Results had good results. His MRIs are now scheduled yearly!