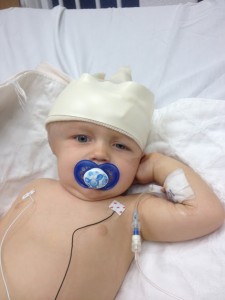 I’m not sure why, but this picture is one of my favorites of Josiah taken at the hospital. The bandage is on his head to keep the swelling down. 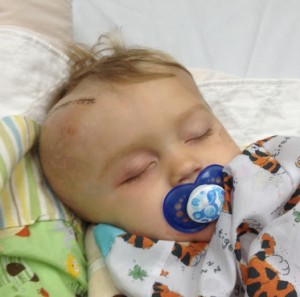 Here’s a picture of what he looked like before. The neurosurgeon drew 2 ounces of fluid from his head before putting the bandage on. 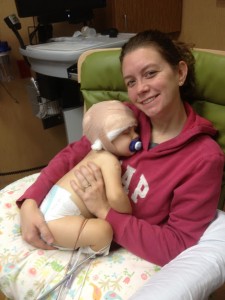 The bandage/hat didn’t stay, so the following day 2.5 more ounces were taken out, and we ended with this bandage, which worked wonderfully in keeping the swelling down. 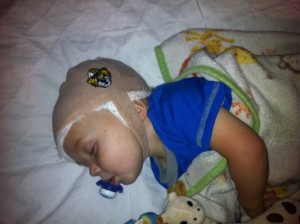 We later found a Truman the Tiger sticker, just in time for the MU football game, placed it on the side and called it a football helmet! Between this procedure and the antibiotics, we were finally seeing real progress!

That was three years ago.
Now for a fun, more recent story…

Our kids like to keep me on my toes. Each day has challenges of its own, but also some good times as well. The time of day when I’m fixing supper seems to be the most challenging.

Josiah’s most recent fascination is taking cups off the counter and using them for himself – whether it’s to drink from, or to dump in new cups or bowls, causing large puddles on the kitchen floor! The older kids aren’t fond of him drinking from their cups. They’re learning to place them farther back on the counter, so they aren’t “bubbleized” by Josiah. (He likes to blow bubbles in their drinks as well.) 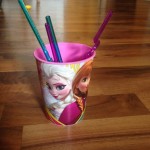 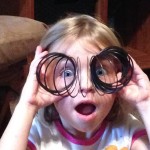 About a month ago, Ruth Ann had a pink Frozen cup for the day. She also had picked out four straws to go in it. Why? Because she’s Ruth Ann, that’s why.

Anyway, I was fixing supper and saw Josiah reach up and grab her cup, and quickly decided it wasn’t worth delaying supper any longer to deal with Josiah being upset by me taking the cup away. I was hoping that Ruth Ann wouldn’t notice and avoid the drama that would surely ensue if she came in and saw Josiah with her cup.

Alas, in Ruth Ann walked and immediately cried “NO JOSIAH! That’s my cup!”

I assured her that I would wash her cup and straws before supper, if she would please just let him play with it while I finished up supper. She gave one argument, stating with a pout and a little whine at the end,

“Ok…but that was my Science Experiment!!!”

In that moment a whole bunch of “science experiment” things ran through my head, wondering what it was Josiah was currently drinking, as well as hoping there was nothing too experimental in that cup! So I quickly, but cautiously asked, “What was in the cup?” all the while trying to hide my concern.

Her response was, “It’s just water” with a tone that seemed to wonder why I would ask such a question.

It’s always an adventure around here!