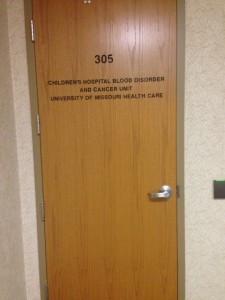 I don’t want to cheat you readers by simply offering a giveaway (open until October 31st!) and a chance to ask questions, so here’s some blog content as well!  I’ve written much about Josiah’s diagnosis and month long stay in the hospital, but haven’t really gotten into the 16 months of chemotherapy.  Here’s a quick overview of what our Mondays looked like.

Our day would start at the hospital at 8:30am, so we were able to get the kiddos to school then head to the hospital. Josiah had an exam, all his vital signs taken, and then his port was accessed and blood drawn for labs. Then we waited.

We waited about an hour for the lab results to come back. The blood numbers had specific criteria that determined whether or not Josiah was ok to get chemotherapy. We then waited about another hour for the chemotherapy to be made, then Josiah was transferred from the Cancer center to the Pediatric Intensive Care Unit. (The only reason he was in the PICU was due to his Diabetes Insipidus – long story short, because of all the IV fluids, Josiah needed to have a specific IV medication that is only allowed to be given in the PICU.) 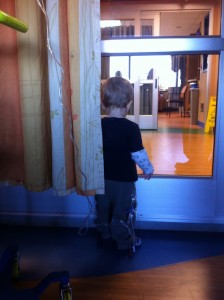 By the time we were in the PICU and IV fluids were started, it was usually 11:30. Josiah then received IV fluids for one hour. After the fluids, he would have one hour of chemotherapy through an IV. Then he would have four hours of fluids afterwards, which was 6 hours total hooked up to an IV. We were usually done around 5:30, and able to be home in time for supper. 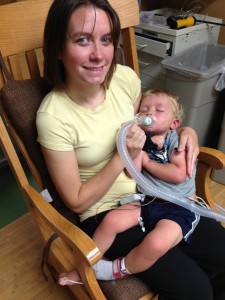 July 8th was Josiah’s first allergic reaction to the chemotherapy. Our chemotherapy days at the hospital got much longer after that! Instead of having one hour of chemo, the IV was spread out over two hours, making 7 hours hooked up to an IV. Josiah was also given Steroids and Benadryl to help prevent another reaction. That worked for a week. 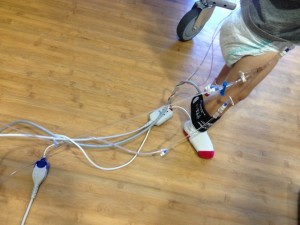 We then changed to a desensitization schedule with the chemotherapy, which worked for the remainder of Josiah’s therapy. This schedule meant the chemotherapy would take longer and Josiah had to be hooked up to the monitors (Heart rate, respiratory rate, oxygen level and blood pressure – and he couldn’t leave the room) for the duration of chemo. Thankfully, he slept most of that time. Thank you Benadryl! It now took about 3 ½ hours to get chemo, making his total time connected to an IV 8 ½ hours.

At this point we started getting to the hospital around 7 or 7:30 in the morning, and on a good day we were able to leave before the 7:00pm shift change. Most of the time, however, it was after 8:00pm before we were done.

Those were some long days, but to be quite honest, those were not the hardest days of the week. Mondays were fairly easy, as my only focus was making sure Josiah was happy.  So that’s how the majority of our Mondays went from February 2013 to the end of May 2014.