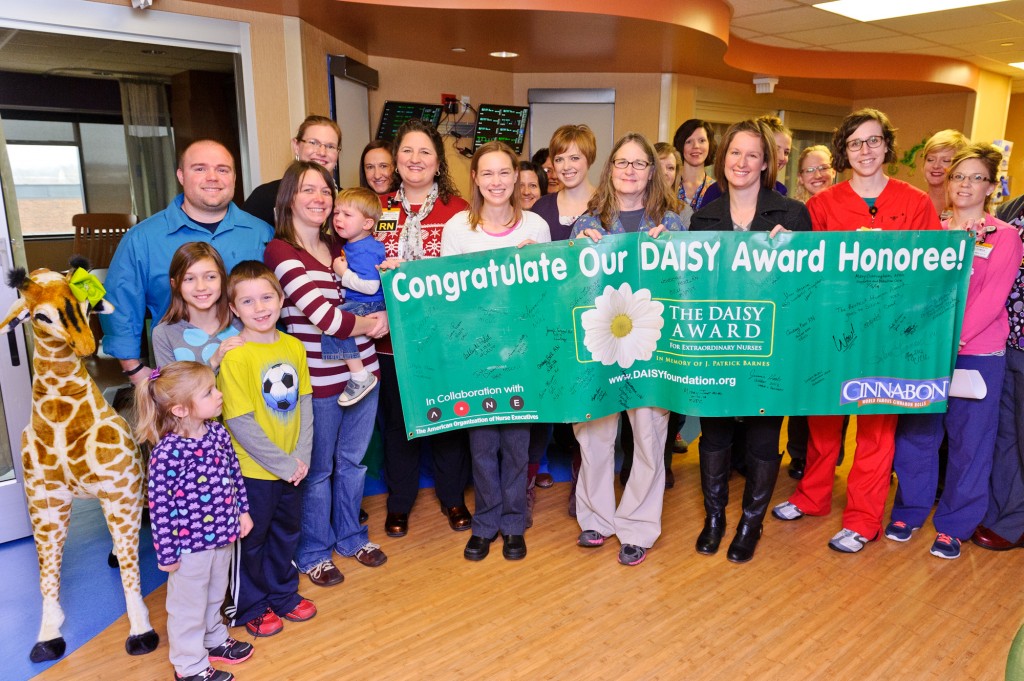 On Thursday morning, December 11, 2014, our family was invited to be a part of a ceremony for three of Josiah’s nurses. Each nurse, Renae, Kathy, and Kristen were awarded with the DAISY Award.

While in the hospital each week with Josiah, we saw cards available to fill out to nominate outstanding nurses for the DASIY Award. There were a few weeks I’d pick a card up and plan to fill it out, but honestly, never gave it a thought once I got home. I felt bad that I was unable to give recognition, but also didn’t have the energy for anything else at the time.

A few months ago I decided that I needed to fill out that form. I looked up the information and had to stop. Again. This time my dilemma was not in the lack of time, but a huge question of “WHO do I nominate for this award?” The list of qualified nurses who popped into my mind seemed almost endless! Where was I to begin? And I could only nominate one. It didn’t seem fair.

Our family would like to nominate these three amazing nurses for the Daisy Award. I am sure it is rare to receive three nominations, however we firmly believe that all three have met and gone above the criteria, and to simply nominate one for the award would be impossible to do.

Our two year old son, Josiah, received chemotherapy treatments in the PICU every Monday for a 16 month period, from February 2013 to May 2014. Prior to that, he spent 26 days in the PICU after a 14 hour brain surgery to remove a brain tumor. If we could, we’d nominate every single nurse that was by our side. Please know that we are thoroughly impressed with the entire staff at both CBCU and in the PICU; from the nurses, doctors, residents, child life specialists, receptionists, front desk staff, pharmacy, and even the people who delivered meals from the cafeteria.

We chose to nominate Kathy, Kristen and Renae because they were the three nurses who rotated being Josiah’s chemo nurse each week for 16 months. Josiah arrived in the PICU around 10am each Monday, waiting for the chemo to arrive, administering fluids for an hour, chemotherapy for 2 ½ hours (every 15 minutes an injection was given and he was watched closely for an allergic reaction during this time, which was common) and given 4 more hours of fluids afterwards. Each hour also required lab draws to check sodium levels. We would leave the hospital anywhere between 6pm to 9pm, depending on how the day went.

Kathy, Renae, and Kristen all demonstrated patient centered care by simply letting us know what they were doing each time they were in the room. By the end of the 16 months, we had the routine down, but each time we would be informed of what they were doing; drawing labs, injecting the 2nd dose of chemo, checking vitals, and we would be given the lab results, because they each knew we liked to know. Before adjusting any medication it would be discussed with us, and we were given an opinion in the decision. On a more personal level, we got to know each of these amazing nurses, and enjoyed getting to know each of them better every week we were there.

We felt free to ask any questions and did not feel bad or silly for asking a simple question or trying to clarify something that may have been discussed multiple times before. After all, we felt like we were getting a medical degree ourselves at this time and it’s a lot to take in! We were free to ask “why” and always received excellent answers that were understandable to us.

There were times when each of these ladies was an advocate for us. Specifically, they each knew Josiah, each knew the routine we had every Monday, and they would work their hardest with everyone from pharmacy, to getting lab results, to the doctors/residents; all to get us done and out at the earliest possible time, in hopes that we could join the rest of our family for dinner that night. They advocated for us with the pharmacy, calling to make sure the orders had been received, and to know what time his medication would arrive so they would be ready to go when it did arrive and they could get started right away. They advocated for us to the doctors and residents by relaying any concerns or questions we had. Since we were so used to the weekly routine, if something was different one week and we had concerns about the change, we knew we could go to our nurse and she would speak for us and have our best interests in mind.

The environment was always positive, supportive and safe. Everything was done in order to try to make our son comfortable during his treatments. We spent a lot of time walking in the hallway, because Josiah hated to be in his room, especially with a closed door. However, any time there was an increased risk for infection from being out, they would do anything they could to make the stay inside the room more fun for Josiah. After seeing that Josiah enjoyed playing in water (he would frequent the sink to play, which was too far away from the monitors when he needed to be hooked up) we were given several bedmats, towels, and a bucket of water with some toys to play with. I’m sure this was a huge mess for them to have to clean up afterwards and certainly not convenient, but it mattered none because they saw Josiah happy, which made them happy.

I do not believe there was a time when we stepped foot into the hospital that high quality care was not given to us. All of the nurses worked so well together; when our nurse wasn’t specifically available, another would step into her place and take care of what needed to be done; regardless of the fact that we weren’t their “assigned” patient. Sometimes, yes, we’d have to wait because we weren’t their patient and there are some things that they just couldn’t do. We spent such a large amount of time in the PICU that it was almost a sad day when treatment was over and we would not be seeing this part of our “family” every week anymore. When a person is cared for so well to consider these three ladies (and others on the floor) a part of our family, I believe that should speak for itself.

Each of these ladies showed a commitment to the growth of the nursing profession. Kristen had students with her at times and was an excellent teacher to them. Kathy took care of the nurses on the floor and gave an opportunity to learn when there was a chance to do so with Josiah. Renae *sniff* left the PICU floor to become a pediatric instructor. She was the main nurse who took care of Josiah when he started his treatments. When she left, Kathy, who is on the PICU floor would care for us when she was scheduled for that day. When Kathy was not scheduled, Kristen would come from the pediatric floor to care for us, because no other nurses in the PICU were certified to give chemotherapy.

Each Monday when we were done with treatment and ready to head home, Kathy, Kristen or Renae would each say excitedly, “I’ll be here next week!” or be disappointed that they “wouldn’t be here next week.” and even told stories of “fighting” over who got to care for our son that day. That’s a way to feel loved! Josiah never was overly fond of being at the hospital, but during that last month or so, he was saying “Kristen” or “Kathy” which would just melt their hearts. We hated to be admitted due to sickness, but when we were and happened to be on the pediatric floor, Renae would pop in just to say “hi” because she saw we were there.

I so wish I could nominate all the nurses we came to know so well. I apologize for the lack of very specific examples with a specific nurse; as it was over a 20 month period and each week was so similar. Even times I can remember the scenario, I couldn’t tell you which nurse was serving us at the time.

The DAISY Award is a nationwide program that rewards and celebrates the extraordinary clinical skill and compassionate care given by nurses every day.

Nurses that are recognized go above and beyond the expected to:

To read more about the DAISY Award, you can visit MU Healthcare’s information page. http://www.muhealth.org/supporter/daisy-award/