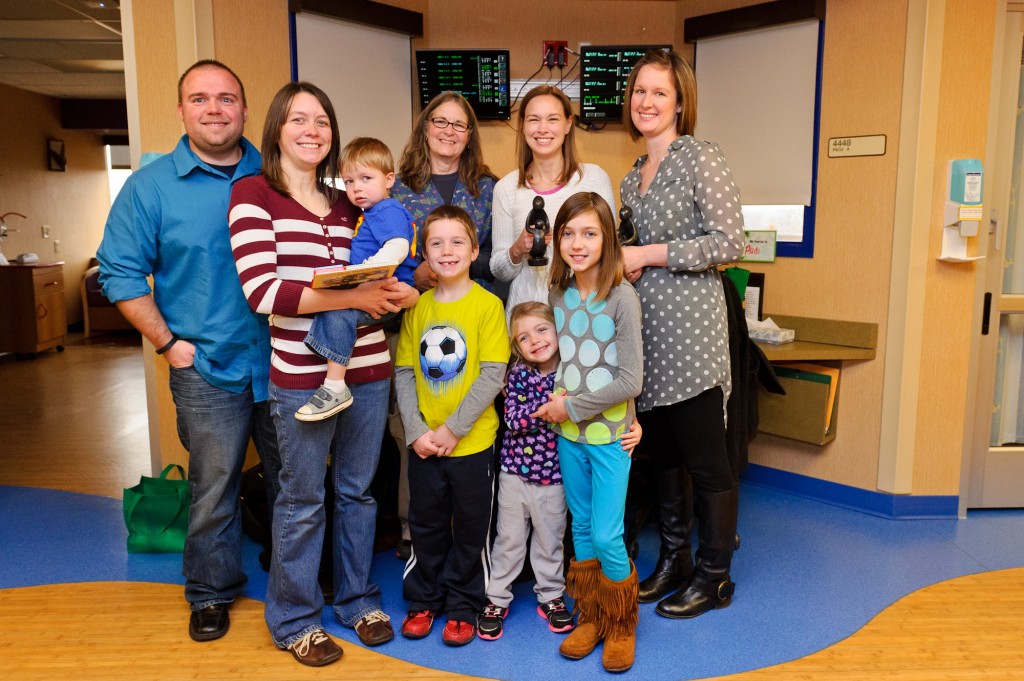 Today’s blog post is super easy, since it consists of a simple copy and paste from InSight – News for University of Missouri Health Care System employees. A huge thanks to MU Healthcare Public Relations for allowing me to post the following article that was written for employees. We were also told our picture appeared on the home screen when employees logged into their computer. How exciting!

Three-year-old Josiah Tuley knows well the doors of the pediatric intensive care unit at Children’s Hospital. He cries when he sees them.

His parents, however, know that while the cancer treatments Josiah received there were difficult for him, the PICU is also the place that allows Josiah to be a child again. It’s also the place where three nurses stand out among the many who helped the family during Josiah’s months-long battle.

Josiah’s parents, Nathan and Amy Tuley, were so moved by the care they received over their long journey that they nominated Renae McIntosh, Kristen Medley and Kathy Ward for DAISY Awards. Every member of the Tuley family was present when the awards were presented Thursday, Dec. 11, by Christina Vollrath, RN, MSN, director of nursing at Women’s and Children’s Hospital.

“If we could, we’d nominate every single nurse that was by our side,” Nathan and Amy said in their nomination. “We are thoroughly impressed with the entire staff. We chose to nominate Kathy, Kristen and Renae because they were the three nurses who rotated being Josiah’s chemo nurse each week for 16 months.”

Josiah, who despised being confined to his room or bed, was a frequent sight in the hallways of the PICU, tootling around in a toy car with his IV and a parent trailing behind him. He called the stuffed giraffe in the doorway of the unit “my dog,” and every time he passed it, he would stop to climb on it and give it hugs and kisses. He would announce his readiness for adventure when he awoke from his naps by pointing to the door and saying “bye-bye.”

The Tuleys got to know the PICU staff very well during the months of treatment Josiah went through, including 16 months of weekly chemotherapy every Monday. During those days, Josiah would receive an IV, multiple injections and blood draws.

“Kathy, Renae and Kristen all demonstrated patient-centered care by simply letting us know what they were doing each time they were in the room,” the nomination said. The nurses kept the parents informed of everything that was going on, explaining anything that was outside of the routine. They also worked as advocates in an effort to get Josiah home as early as possible each week to have dinner with the rest of his family in Holts Summit.

Ward, RN, a staff nurse in the PICU, said she made an effort to rearrange her schedule to work on Mondays, the day Josiah received his treatment.

“Because Josiah has such complex medical issues, consistency is patient care was very important for Josiah’s parents,” Ward said. “To have a different nurse every week who had to learn his chemo, etc., would have been difficult for the family, which was already under a lot of stress having an ill child.”

The Tuleys eventually began to think of the PICU staff as family. By the end of his treatment, Josiah had even learned how to say the nurses’ names.

McIntosh, RN, MN, a staff nurse in the PICU and a pediatric clinical instructor, said she loved coming to work on Mondays because “I knew that I was going to have Josiah as a patient, and it was going to be a good day!”

“It’s an honor to know that even in a sad situation, we have touched this family’s lives in such a positive way,” McIntosh said. “I’m sorry he was diagnosed with cancer and had to go through treatment, but I am so glad I got to be a part of it at the same time.”

Medley, RN, who was also awarded a DAISY Award in September 2012, said Josiah and his family became a part of her family.

“Some people don’t see their good friends weekly, and I saw them every Monday,” Medley said. “We would talk at length about Josiah’s therapies and what fun things their family was doing at home. They knew every fun story there was to know about my daughter.”

“We spent such a large amount of time in the PICU that it was almost a sad day when treatment was over and we would not be seeing this part of our ‘family’ every week anymore,” the Tuleys said.

The DAISY Award’s history is rooted in patient appreciation. The family of J. Patrick Barnes, who were impressed with the clinical skills and compassion of the nurses who cared for Patrick, created this international award to thank nurses everywhere. Patrick died of an auto-immune disease at the age of 33. DAISY is an acronym for “diseases attacking the immune system.”

To learn more about the DAISY Award or to nominate an extraordinary MU Health Care nurse, please visit www.muhealth.org/DAISYAward.