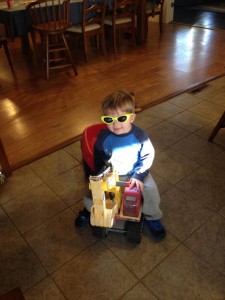 The year is almost over and we enjoyed spending time with family. Josiah’s MRI on December 2nd showed good results, and he doesn’t go back for an MRI until June. Josiah received Botox in his right arm and hand, which has been very helpful in loosening up the muscles, enabling better use of the arm. In fact, right before Christmas, Josiah was able to move his right thumb and index finger to grab onto a toy and place it in a bucket during therapy. THAT was an awesome thing to see him do!

Our most recent update – Monday evening, Josiah pulled a barstool down on top of his big toe on his left foot. The toe is black and blue, top to bottom and front and back. He wasn’t walking on it, but was walking on his knees, placing more weight through his right leg, and crawling. While crawling, he was using his right arm and pushing weight through the arm as well! So it has proved beneficial for building up his right side! The hardest part for me was right after he hurt his toe, when he lifted the toe up to me and said “Mommy can you kiss it for me?” Oh how I wish that could’ve worked! 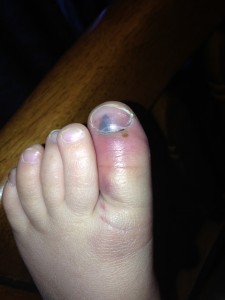 Thursday morning he was still not bearing weight on the toe, but was starting to walk up on the side of his foot. We were hoping he would be walking on it some by then, because that was the day we had to take him for an X-ray if he was not bearing weight. When we told Josiah he’d have to have a picture taken of his toe, he was very upset and not wanting to go. I then realized he goes to the hospital to “take a picture of his brain”, which requires needles and going to sleep. I told him there would be no needles and he said “Whew. That will be okay then” and went on with his playing.

Josiah had an X-ray at 12:30 and saw his doctor at 1:00. After Josiah talked with the doctor for about five minutes, our doctor was finally able to get a word in. The conversation went like this…

Doctor: “Well, it looks like you have a broken toe.”

Josiah, with a cute determined high pitched voice while shaking his head: “No.”

Josiah, with the same cute little voice: “No I don’t!” 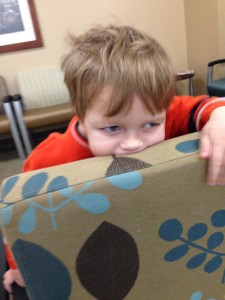 Our doctor explained that it is only broke underneath his toenail, and only goes up to the growth plate, and not into the growth plate. There isn’t anything that can be done, so we will wait. He said it should heal on it’s own in about 4 weeks, and that Josiah should be walking on it again in about 2 weeks. Josiah was happy to hear that he didn’t have to have anything else done, although he will tell you that the doctor didn’t do anything. It’s so difficult to explain all of this to him!

Here’s a picture of him waiting for his X-ray.

Josiah had his last vaccinations on December 11th. He did really well with it, although getting him out from underneath the chairs where he was hiding was quite the challenge. He also had an appointment with his endocrinologist, which went well. All of his hormone levels are doing well with his medication and we didn’t have to make any changes.

Josiah’s growth is being watched, and it is very possible he will need growth hormone. It is likely he will start this in June (unless he has a massive growth spurt, which would be awesome!) We are waiting until June because that is two years post-chemotherapy. Waiting two years decreases the risk of growth hormone causing tumor growth.  Another low risk of the growth hormone is an increased risk of leukemia. Because Josiah already has an increased risk of developing leukemia because of the type of chemotherapy he received, the growth hormone makes that risk a little higher. However, Josiah’s smallness is becoming more obvious as he’s the size of a two year old, and he’s now four years old. He will see the endocrinologist again in March.

Josiah is growing though, even if slowly. We’ve seen some changes in his right leg, which will require more therapy options as he gets taller. It’s possible in March that he will have Botox placed in his leg, and then a cast placed on the leg for 3-4 weeks. That will prove to be interesting, as Josiah loves water, and we’ll have to keep it dry! He has more appointments (rehabilitation doctor, orthopedic surgeon, and physical therapists) in February, which will determine what will need to be done with therapy and Botox.

In January, Josiah has an appointment with a neuro-opthalmologist. He’s been doing really well with his vision, and we’re waiting for him to be old enough to be able to test for color blindness. We’ve worked on colors over the last year during therapy, and he’s still not consistent in this area. It’s hard to know if it’s due to vision or a learning disability. We have more questions than answers still, and will continue to learn more slowly as he grows. I can’t say I expect to have more answers during this visit, but am looking forward to hearing what the doctor has to say.

I’ll continue to update as we learn more! Everyone have a Happy New Year!