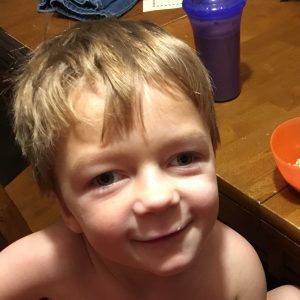 Josiah and I were up at 4:30 yesterday to make granola bars for breakfast. He wasn’t able to eat or drink after 6, but since he woke up extra early, I took advantage of getting him some food and drink while he still could! We dropped Grace off at school and the other kids were already with my parents. 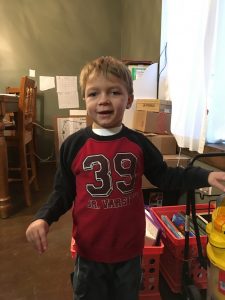 We got to the hospital a little before 9 and went straight to get vitals and get an IV in. Josiah was a champ! He was timid and told us “I’m a little scared” and then he’d start a conversation and seem to forget about what was going to happen. We were able to get him watching Daniel Tiger on his tablet when it was time to get his IV. Since his arms were cold, the nurse wrapped them in warm blankets. He had great fun pretending they were robot arms! 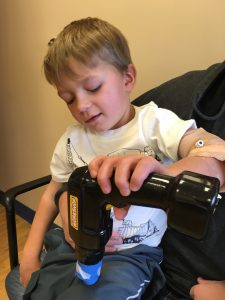 He wasn’t pleased when they took his right arm to find a vein, but it was easy to distract him. They were able to get the IV in, but weren’t able to draw blood from it, so they had to use the left arm. At this he was determined to hide his arm while yelling and trying to wriggle away. They were able to get the IV in, but again, it did not work. After that, we requested some medication to help relax him. He was able to go to the play room, which made him happy. When he started stumbling around the room, we brought him back into the exam room. While he didn’t like the fact they were using his left arm to get an IV in, he was very cooperative! He had found a drill in the play room and had fun playing with that as we waited to be taken down to the MRI room. 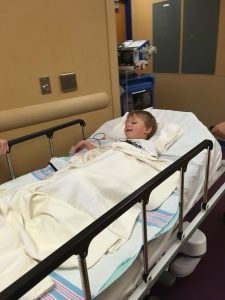 He enjoyed the stretcher ride, still holding on and playing with the toy drill. He enjoyed trying to get people with it, as you can tell in the photo! The MRI went great, they told us there were no problems and everything went really smooth. He was in and out within 30 minutes. We then headed back up to the cancer unit and waited for him to wake up. 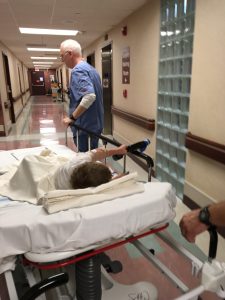 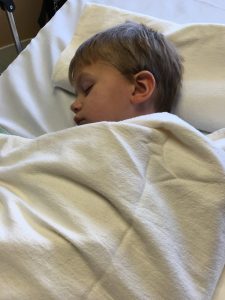 He woke up happy and ready to eat, enjoying a slice of pizza, some chips and chocolate milk. His food choices have changed, but the drink of choice has not! 🙂 He wasn’t ready to leave, so we spent a few more minutes in the play room before heading out to his neurosurgeon appointment. 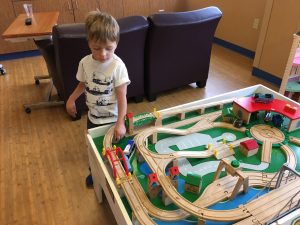 He was happy at the neurosurgeon’s appointment because we assured him there would be “no shots, no needles,” which instantly relaxed him. He was very chatty with them, and loved telling them about Paw Patrol, Daniel Tiger, his friends at church, his papa, and teachers at school.

We learned that there were no changes from the June MRI and were free to go! His next MRI is on June 28th. Before heading home, we stopped and got frozen custard from Culvers!  That’s turned into more of a tradition after big appointments. We were able to go home for a little bit, enough time to take a quick nap before heading into church. Josiah was good to go after his nap and excited to get to church.

And that was our day! Thanks for keeping up with us, and thanks for your prayers! We definitely felt them, and have been blessed with continuing clear scans.