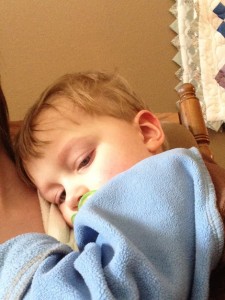 In my first Everyday Struggles post, I mentioned that Mondays (chemo days) were the easy ones. I also shared that Tuesdays were another story.

Chemo days were on Monday, and our normal time to be home was anywhere from 8-10pm. Josiah had never slept the best, but Monday nights seemed to be worse. He needed medicine every 6 hours, which meant setting an alarm to wake up. Typically, we’d get home at 8:00 and have all the kids in bed by 9. I could either go to bed and sleep for two hours before waking to give medicine at 11pm or just stay awake and go to bed after giving him the meds. Six hours later is 5:00am, which at that time, Josiah was ready to be up for the day. So Tuesday mornings started early!

Fortunately, he wanted to go back to sleep for a morning nap. Unfortunately, it was the time everyone else was getting up. Starting off the morning exhausted isn’t a good start for myself. Grace and Samuel were in public school at this time, so our mornings were chaotic getting everyone out the door on time, especially with Josiah who was ready for a nap!

I want to share a little of what I journaled back in February of 2014. I wrote these words at a time of extreme frustration. Not frustration at anyone or anything. But frustration at the fact the entire situation we were in was out of my control and there was nothing I, or anyone else, could do about it.

“I start the day off exhausted. Breakfast time. By this time I’ve already fixed and fed Josiah something, anything he will eat. Usually it’s eggs. So the pan is still on the stove and dirty. The granola bars I made in a hurry the night before are in the fridge ready, but the dirty dishes and ingredients are still left on the counter. Then we cut the bread and get crumbs everywhere, and add the toaster and Nutella to the counter. While I’m doing that, I also need to fry a few eggs so that granola bars are not all Samuel gets to eat and we can hopefully have some for the next morning. I also pull out the ingredients to make a breakfast shake for Nathan and I, and get chocolate milk for the little ones. If Josiah is awake, I’m getting his 5th cup of water because he’s decided he no longer wants the cup he picked out two minutes ago that I just filled up for him. And I have to remind myself, he’s not feeling well.

The kids can’t find one specific part of an outfit, and I try to help. It can’t be found because the laundry has been done and put away by whoever was there on Monday. Explaining to my children to be thankful and to please just find another outfit because I don’t know where it is and I need to finish fixing breakfast and tend to Josiah who wants down for a nap and Ruth Ann who needs more milk is what is frustrating. I can’t fix it. Then I have to add to the mess on the counters and get all Josiah’s meds ready, and then rush out the door to take the older kids to school. That’s the first hour. I’m exhausted, Josiah’s ready for a nap, Ruth Ann wants to watch TV, and I just want to take a shower and go pee. So the mess stays. All. Day. Long.”

That was just an hour!

Disclaimer * I’m thankful for our moms coming and cleaning and doing laundry and putting it away so we had clean clothes to wear! And usually, the misplaced item was later found in a very obvious location that I overlooked due to being hurried, tired and stressed. *

Josiah really didn’t usually get sick with his chemotherapy treatments. We were given zofran in case, and I ended up just giving it scheduled on Tuesdays by the end of his treatment. He threw up maybe a handful of times during the 16 months of treatment. Towards the end of treatment, it was obvious that he did not feel well on Tuesdays. Here’s another frustrating moment on a Tuesday I wrote about.

“One Tuesday I rushed to get supper ready so Nathan could eat with us before leaving for the evening for a meeting at church. Supper was ready on time, although Josiah was upset (screaming/crying) the whole time and I don’t even remember what the older ones were doing. We ate and I still needed to read a book with Samuel for his homework. I sent him to shower so I could clean up in the kitchen and Josiah was ready for bed. I gave Josiah his meds, which he immediately threw up all over the floor. I gave him a bath and sent the girls to bathe in the other bathroom. While watching Josiah in the tub the girls were screaming at me from the other bathroom because they needed something. Samuel was my messenger back and forth. He still hadn’t read his book. We did squeeze that in during Josiah’s bath and the girls successfully showered, although they ran out of hot water. And the throw up in the kitchen finally got cleaned up and Nathan made it home. Tuesdays. Hate them.”

Nathan dropped some of his activities to be able to be home on Tuesday evenings and I truly appreciate that sacrifice. He also was able to rearrange his work schedule to be able to take the older kids to school on Tuesday mornings. That helped tremendously.

If you would’ve asked me at that time, I’m not sure I would have been able to express what I was going through or how hard Tuesdays really were. They were just a part of our everyday life at that time, and normal to me. I mentioned above I wrote these words out of frustration. I also wrote these words a few days before a scheduled MRI. An upcoming MRI was (and is) a source of extreme stress and anxiety for me, causing me to be more frustrated and agitated and most definitely not myself. (More on that later.) While our lives were stressful, I had learned to adapt and roll with things – a benefit of my laid back personality! Honestly, even though most days were likely similar to the above, I didn’t feel the stress and frustration on a daily basis.