Why church was hard:

Following Josiah’s surgery, he fell back into somewhat of a newborn’s sleep pattern. If he was overstimulated (which was often) all we had to do was take him to his dark room (ok. It was our master closet-completely dark and very quiet as it’s away from the rest of the house.), lay him down in his crib (pack n play) and he would fall asleep. When he woke up, he would be awake for about an hour before he was ready to be back down for a nap again. At night, he followed a similar pattern. Needless to say, I didn’t get a lot of sleep! 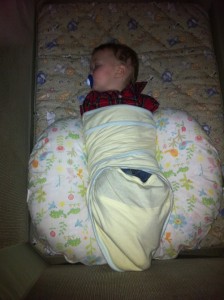 During this time, it was hard to go and be anywhere, because when Josiah was tired, there wasn’t a lot we could do to calm him unless we were home. He just liked it dark and quiet.

At church I stayed with Josiah either in the nursery/nursing room or the cry room. I’d watch the service on a tv. It worked well, as I could monitor the volume and Josiah could play or sleep, whatever he was needing at the time. There were times friends would take Josiah so I could be with Nathan during service. There were also a few times he would allow me to leave him in the nursery. It was hit and miss, as it is with most one year old children.

When Josiah started chemotherapy, I was hesitant to leave him in the nursery, or even have him out and about, especially in the winter. As time went on, we came to a nice routine on Sundays. I was able to bring Josiah into the sanctuary for the praise and worship time. Josiah liked the music and it seemed to lull him to sleep. Most of the time, he took a great nap and we were able to go out to lunch afterwards.

As Josiah got older and napped less, it became more of a challenge to continue this routine. First, he would wake up when I sat down. At that point, I stayed towards the back and stood during the whole service. A little later, Josiah would not settle down in the back, wanting to go out into the hallway; so I started standing at the sides of the sanctuary.  That didn’t last long either.

At the beginning of 2014, a year into chemo, Josiah was refusing to sleep during church, would refuse to go to anyone besides Nathan or I, refused being in the cry room or nursery (even with me), and was simply not happy to be at church (or anywhere for that matter – church was just the place we were at consistently). We also weren’t keen on leaving him crying in the nursery. While he may have calmed and learned to be in there for the hour of church, we were still leery of leaving him and increasing risk of sickness. A simple cold required increased medication and a fever meant at least a 24 hour hospital stay.

This time was an extremely hard season.  Nathan or I one would have to take him out and miss church. It got to where we were driving separate, or I would just stay at home. Here’s something I wrote one Sunday in February about church:

“After a rough week I’m finally starting to feel like myself again late yesterday and this morning. I decide, perhaps a little too optimistically, that we can all go to church together. I was smart and drove separate, simply because I knew the plan had a chance of failing. Josiah always wants to “go bye bye” and “church” is one of the places he wants to go. I really thought he’d go into class with his sister. That didn’t happen. And he wasn’t tired enough to fall asleep during worship like he used to do. Instead, he was done before we really walked in, and was completely done when his daddy left to go help serve communion. I tried the cry room, which he hates because we’re stuck in a room, and then tried upstairs with his sister again. No such luck. He was happy, however, roaming up and down the hall and up and down the stairs. Knowing he’d be ready for a nap soon and that I wouldn’t get to do Bible Fellowship, I just left. So now we’re at home, I laid down with him for a little bit and I’m too frustrated to really do anything else.”

It was a very frustrating time for me. I wrote to a dear friend who understood, and this is what I shared with her:

“Josiah LOVES going places, but that’s about it. He’s happy to “go,” not STAY. I hesitate to put him in class because of sickness, but he wouldn’t stay anyway. And he’s certainly not happy to sit still during church–or anytime really, what two year old is? This semester we joined a life group, but he’s not been happy there either, so tonight I didn’t even try. He was asleep at 6, so I think that was a good decision.
Anyway, it’s been a fight since Christmas (maybe even the month of December) to be at church. It’s been fairly frustrating, and I know we’re almost done. But it’s so stinkin hard!”

My friend’s response was so very comforting, reassuring, and soothing to my soul that evening.

“Sweetheart I know this is so hard. You feel isolated and out of touch. You have to do what is right for him, but that’s even harder for you because you feel well. Winter has been hard this year and adding the stress of a child having chemo, I’m so proud of how you have kept things together. I know the end is close, but weeks can seem like years some time. Stand strong my little friend. Josiah will need to do things on his time schedule and you and Nathan will know how to help him because God will guide you. This whole thing just stinks, but you can do this. Lord –touch Amy tonight with gentle peace that helps her heart to know that through this storm you’re there. Much love to you.”

Even though it was a weekly struggle, I couldn’t have done it without the friends and fellowship we have with our church family.

I also couldn’t have done it without Nathan. At this time, since Nathan was leading a Bible Fellowship class, we decided that he would attend Bible Fellowship and I would attend church. I was able to attend service with our older kids, and Nathan listened to the service via our church’s live video stream while driving all over town and Josiah would take his nap. (The live stream has been a HUGE blessing to our family!) Although I was back to attending service, it wasn’t quite the same, as we weren’t able to be together as a family.

Even times throughout this last year have been hard in this area. But thankfully, since school has started up, Josiah has done great at church and enjoys going to class. I’m back to really looking forward to being at church again. It’s not that I didn’t enjoy going – it’s that I’m actually able to go, be fully present, and know Josiah and I are both enjoying it.

I do miss holding him during worship though…