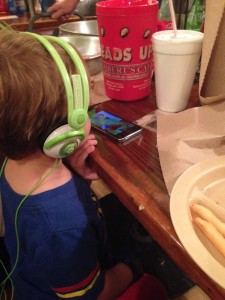 Going out to eat at restaurants is sometimes a challenge with Josiah. It’s definitely getting better, although when we do go out, it’s usually fast food (Chic-Fil-A where he can play or the drive through) or HyVee where we can leave and get groceries when Josiah’s done with sitting at the table. Going to a sit down restaurant can be a little tricky.

On our way home from Branson last week, we met my brother at Lambert’s for lunch. Josiah napped on the way, which was awesome to not have to take in a tired boy! As we walked in, I noticed the crowds of people, the hum of everyone talking at once and music playing in the background. I was surprised Josiah handled that well as Nathan carried him inside to sit at our table.

Once at the table, Josiah was happy, allowed us to order, and enjoyed drinking his daddy’s sweet tea. When we were thrown some rolls, he was a little upset because he wanted french fries. We assured him our food would be coming soon, and he was contemplating trying a bite of the fried okra that had just been passed around.

No sooner than Josiah picked up the piece of okra, a local softball team walked through and a large table of people began clapping and cheering loudly.

For those of you who know Josiah, you know he is deathly afraid of applause. As I heard the cheers go up, I knew our pleasant dining experience was over.

Josiah started with a high pitched scream that turned into crying. I placed my hand over his ears as he laid his head in my lap. The cheering was over, but he refused to let me remove my hands to pick him up, and he was still crying. “Mommy, I don’t like them to clap” he would say as he cried loudly.

Normally, in a situation like that, we remove Josiah from the room, take him outside, and eventually he will calm down. However, we never get him back inside the doors of where we just left. Since our food hadn’t even come yet, I didn’t like that option. We do try to respect those who are dining who prefer not to hear a child screaming all through their meal. However, I can say honestly, my attitude was not one of respecting the people who’s cheers overwhelmed my son to the point of tears. I told Nathan I wasn’t taking him out; that he had to listen to them shout and cheer so they could listen to him scream. (To their credit, they had no idea what their cheers would do; but it didn’t keep me from being frustrated that our lunch had been ruined.)

Nathan went out and brought in the headphones that we keep in the car. We hooked the headphones up to Nathan’s phone, turned on Netflix and that helped to calm Josiah. He watched the phone for the remainder of our lunch, and he never touched a bite of his food.

I wanted to share this experience for two reasons. First, because it is an everyday struggle that we deal with. Second, because we aren’t the only ones dealing with this type of a situation.

I would venture to say none. I know before our experiences with Josiah, I wouldn’t have.

It has been a learning experience for me; to be able to do what is best for my son without worrying about the judgement of others. I remember once soon after Josiah’s surgery, we were at Culvers getting ice cream with our kids and Josiah started crying. Nathan took him out to the car to wait while I finished up our ice cream with Grace, Samuel and Ruth Ann. Grace told me that she didn’t like it when people stared at us. It happened often. I’m not one to be the center of attention, and the attention that Josiah drew while we were out and about was more than enough for this mama.

Two things I have learned over the last few years. One is that I am to do what I feel is best for our family, regardless what other people think of me. My value and worth comes from God, not others.

I will admit that sanity in those moments will usually trump any wise parenting practice. I recall one evening in Shakespeare’s pizza after a doctors appointment when our food had arrived. I had just spent the time waiting on the food chasing Josiah all over the restaurant and all I wanted to do was sit down and eat one slice of pizza in peace. Josiah was happy in his high chair with crackers. Instead of eating these crackers, he was having a wonderful time crushing them in his hands and throwing them on the floor. Instead of taking them away, I opened a few more packages and passed them his way…

Second, when I see other people in a similar situation to what we often face with Josiah, instead of being quick to judge, I instead take a step back and offer up a quick prayer on their behalf. Regardless of whether there is an unseen medical issue or it does just happen to be a spoiled child in need of some good parenting, prayers are much more beneficial than judgements or criticism.