We’ve had quite a bit happen already this month, so I’m updating a bit early! 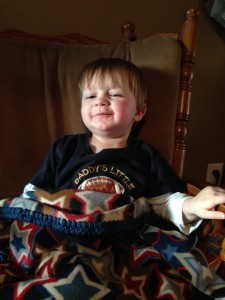 February 4th Josiah had a series of appointments. The nice thing was that we went into one exam room and stayed there and all the specialists came to us. He saw his rehabilitation doctor, an occupational therapist, physical therapist, speech therapist, pediatrician, nutritionist and orthopedic surgeon.

It was a long morning; our appointment was at 8, we waited for a room until 9:30 and left around 12:15. But it was a good day and Josiah handled it very well.

We were first seen by the rehabilitation doctor. We’re looking into putting botox into Josiah’s shoulder and elbow. It doesn’t take long to do the shots, so the complication is scheduling a time that fits into the MRI, sedation, oncology, and rehab schedules so we don’t have to sedate him more than he needs to be. The botox shots will help the muscles in his arm that are really tight. We’ll need to increase therapy and ensure he is wearing his splints in order to get the full benefit.

The hip x-ray taken on Josiah last month looked good; it was taken to provide a baseline for comparison as he grows. So far, the rehab doctor and the orthopedic surgeon were very pleased with how well he is doing with his shoe inserts and brace, so we’re just going to keep doing what we’ve been doing!

Physical and Occupational therapy (PT/OT) also went well. PT was happy with the brace and inserts and agrees Josiah’s doing well. She suggested introducing a cane to help Josiah with any vision issues he may have. A cane would help him if he is unable to see depth – stairs or a change in surface such as grass to concrete. The idea of introducing it now is to have him used to having it as an option for when he gets older and more independent. It’s funny that was mentioned, because Josiah has found a long skinny stick that he likes to carry around with him and I had just talked to another of his therapists about the possibility of him using one. It’ll be interesting to see if it helps him out or if he’ll use it. When it was first mentioned to us, he was in a phase of hitting everything (or anyone) when he walked by. That phase seems to have passed for the most part, so it doesn’t seem quite so dangerous…

Our conversation with OT went well and we will be taking steps to increase therapy and add another splint to help Josiah’s wrist. I had already set up an appointment for an evaluation with an OT in town for next week, and my decisions in that area were confirmed.

Talking with the nutritionist and pediatrician went well and we didn’t really learn anything we didn’t already know. Since being off of the anti-seizure medicine, Josiah’s increased eating and even the variety of foods he eats. That said, it’s still very limited, but getting better. Growth is a concern, but is being monitored closely by the endocrinologist. I saw the growth chart, and while he’s not on the chart, the curve looks very similar to what Grace’s curve looks like. So hopefully he’ll keep growing on his curve and we won’t need to worry about growth hormones.

February 5, Josiah started the vaccination process again. He did not finish the rounds of vaccines he started as a baby because he started chemotherapy. Because of that, and chemo wiping his immune system, we’re starting all over. So he received his “2 month shots”. At the appointment he must have remembered his flu shot because he kept telling me, “Mommy, shot will hurt me.” He did cry as the nurse and I held him, but when he got to his daddy in the waiting room he calmed down pretty quickly. So thankful Nathan’s able to be there with us! His next appointment is in two months for another round.

We also saw our family doctor who is happy with Josiah’s progress. He looked at the growth curve and agreed with the familiarity of the curve that is below the chart. Again, lets hope it keeps curving!

Josiah’s legs hurt the next day after his shots and it took him awhile to walk. Thankful for tylenol and not looking forward to more shots.

February 6th and 10th Josiah had a PT and OT evaluation to receive therapy on the medical side. Currently the only therapy he receives is through the school district. I’m looking forward to seeing if he makes progress with increasing therapy. I’ve scheduled times for the additional therapy and he will be receiving therapy every day Monday through Friday; and some days will have therapy twice. His schedule: PT 3x/week, OT 3x/week, vision therapy 1x/week, and a second vision therapy twice a month. He’s going to be a busy little guy.

Last weekend we were excited to take some time off and visit some good friends of ours who live in Minnesota. We weren’t sure what to get the kids for Christmas, so we decided a road trip would be a fun gift for all of us! The kids were super excited to see their friends and were super excited about all the snow. Unfortunately for them, there wasn’t a whole lot of snow and it was very cold, with wind chills up to -30. They were able to go out one afternoon when it was warmer and do some sledding and spent Sunday afternoon ice fishing. They had rented an ice house, which is heated, so they stayed warm and loved the experience with their friends.

Josiah’s next MRI is March 4th.

Ending with a fun quote from the month and a picture of the kids making valentines: 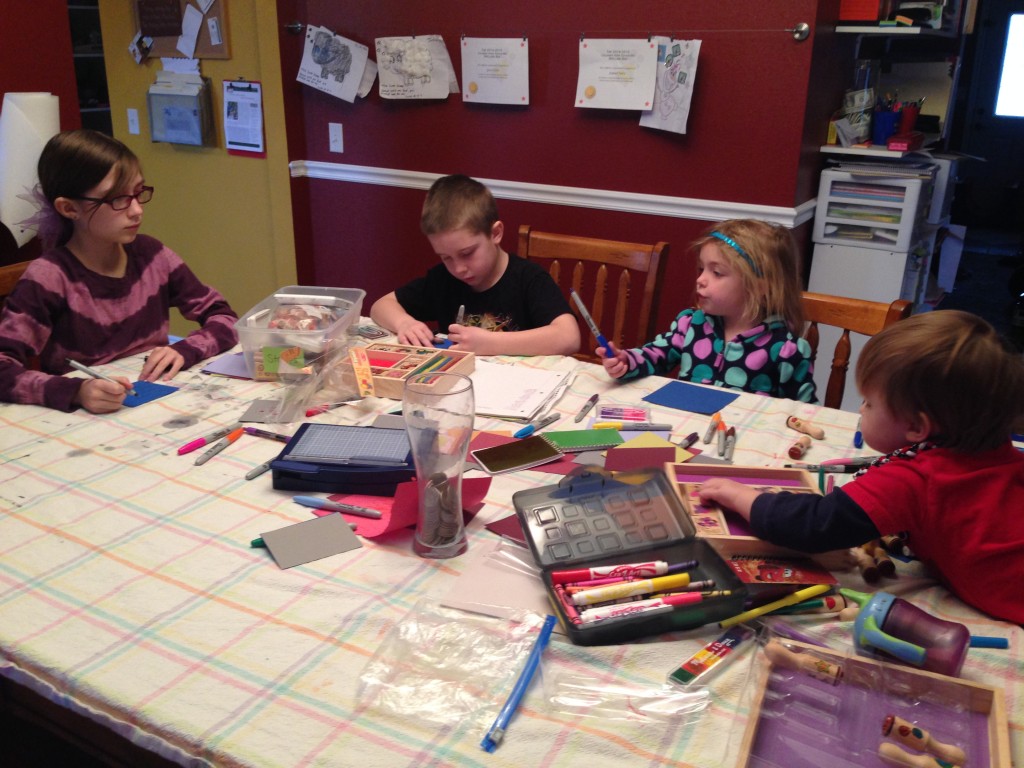