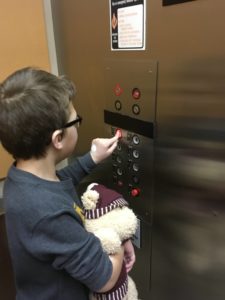 I’m not even sure words can express how well today’s visit went. But I’ll do my best!

Here are the prayer requests we shared yesterday – with today’s answers.

For Josiah’s anxiety before and during the appointment and that it would be a good experience for him. That I would be able to help reassure him, even though he’s scared.

Josiah woke up and came to snuggle this morning. He said he was a little scared. He and I had a good chat about being scared, but that God can work even if/when we’re scared. We decided that David was probably scared going up against Goliath, but God gave David the courage and strength and bravery he needed. We prayed for Josiah to be strong, courageous and brave. God did exactly that!

That he would be able to work through his anxiety, stay calm, and for there not to be struggle. He definitely has a flight or fight response!

Last week when we went into the clinic to get some numbing cream, Josiah walked sluggishly to the elevator and then through the clinic doors. He said, “This place gives me the creeps.” That was with knowing he would not be seen that day and needles weren’t an option.

Today, he bursted through the doors saying, “I’m a pro at this!” And he was!

That I would place the numbing cream in the correct locations in the morning.

So, Josiah’s veins are really hard to see. I put the cream on in three places; two on his right arm and one on his left. He wasn’t happy about the third spot on his left because that’s the arm and hand he uses all the time. However, his veins are not great in his right arm. I did get the cream in two good places. And then I missed a great spot altogether. But that’s okay, we didn’t need it!

That the nurses will be able to get an iv in with only one poke. (It sometimes takes 2-4 tries, which is where I’m sure a lot of his anxiety comes from.)

I should’ve added yesterday that these nurses are AMAZING. Yes, even though sometimes it takes 2-4 tries to get the iv in a good place, it’s certainly not for lack of skill. As stated before, the veins in his right arm are a bit tricky, and we always try that arm first because Josiah prefers that. If it works, it’s much easier! Second, he’s generally crying and/or not breathing well, which causes his veins to collapse and we have to start all over in a new spot.

Today, this was NOT the case! He did need two pokes, but again, he rocked it! We brought his iPad and he was very happy to show the child life specialist his Minecraft world and she did a great job engaging with him. He didn’t even know when they put the first needle in his right hand! 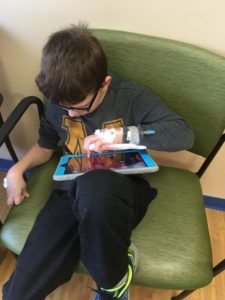 Unfortunately, even with much trying, this one didn’t work. The great spot I missed with the cream was also on his right arm, so we moved to his left. He did great with the transition. Instead of continuing Minecraft, he switched to Disney and watched some Mickey Mouse short clips, which always make him laugh. He and the child life specialist watched and laughed together as they put the iv into his left hand and he did great! There were a few times he took some good deep breaths, which probably helped both him and the nurses.

He was quite shocked when they were done that he hadn’t felt the needles! We are now calling the numbing cream Magic Cream, and hopefully that’ll help differentiate this visit from previous experiences and help calm him for future visits! He suggested calling it the un-hurtable cream, but I’m not sure I’ll remember that one!

And of course, prayers for the results to show no tumor would be great as well!

On our way back home, I got a call saying that his labs were normal and his MRI looked fine! 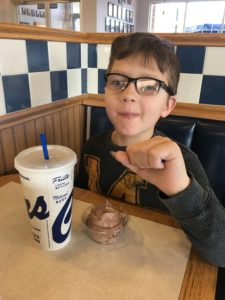 We stopped by Culvers when we left the hospital to grab some lunch before heading back to school. He asked for a big cup instead of the kid cup that comes with his meal and he filled it full of rootbeer. He also got the ice cream. So he’s all sugared up for school!

I cannot say thank you enough to everyone who took time to pray for us. The day was amazing as I watched God work through those prayers.  I stood back and watched everyone at the hospital do their jobs while Josiah sat on his own in the chair. I’m usually either holding him or right beside him, but today, I got a front row seat, watching my boy being a pro – not by his own strength, but by the power of God through him.