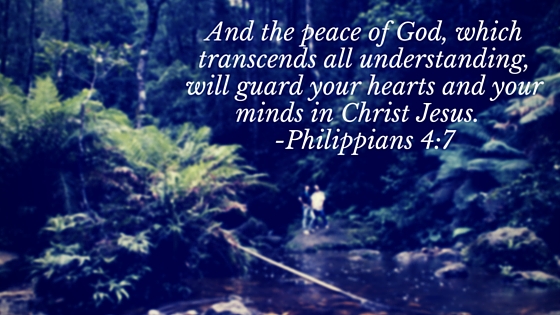 A friend of mine recently asked me, “Did you ever, even for a second, think that Josiah might not make it? And if so, how did you overcome that?”

I am so glad she asked this question. The easy answer is, “yes, I did” and “I overcame that with God’s peace.” I know you’re looking for more than that, so here goes…

This is a hard question to answer, because to put it all into words and actually see it on a screen is so very, very hard to do. Something about seeing the typed words and then publishing said words for all to see is not an easy task!

I started journaling after Josiah’s MRI, in order to give updates on Josiah. Those are easy journals – simply writing out what events happened throughout the day. There’s not a lot of deep thoughts or feelings put into those. It’s more factual.

I didn’t start journaling my emotions and processing things until a few months after the surgery, but before chemotherapy. Most of the time I was unable to sleep and typing out my thoughts and frustrations allowed me to clear my mind and get back to sleep. It is from these journals that I have been able to compile some of my Write31Days posts. I’ve looked through my journals for something that I wrote about those first few days, and the only thing I have found was the information in a previous post, titled What are you holding on to?. Again, putting these thoughts into words and then typing them out; not easy.

I’d encourage you go to back and read that post, but here’s the main idea I pulled from that particular post, describing the days and nights prior to Josiah’s surgery:

The days were mostly normal. We were home. We were with our children, who were enjoying the nice weather and playing outside. I held Josiah more. He napped in my arms and slept in our bed at night. Two weeks earlier he had finally started sleeping in his own crib all night. I couldn’t put him back in that crib.

The nights were hard. After the chaos of getting all four of our children bathed and settled down and in bed, Nathan and I were left physically and mentally exhausted. We were overwhelmed. In the quiet, we had time time to process what was going on around us. It was during that time that we had to fully surrender to God’s will. We talked. We prayed. We cried. We pleaded for God to allow us to keep our son, but remained at peace, even knowing he could be taken from us in the days ahead. When I finally made it to sleep, I slept well. Each morning I would wake up, feeling like I had awakened from a nightmare, only to realize it was reality; and one day closer to the day that would change our lives forever. The night before his surgery, I hardly slept at all.

While I did write about the days and nights leading up to Josiah’s surgery, I found one sentence that addressed the fact that we might lose Josiah.

“We pleaded for God to allow us to keep our son, but remained at peace, even knowing he could be taken from us in the days ahead.”

So yes, we knew it was a real possibility. I made my decisions those few days after the MRI and before surgery based on those days being our last with Josiah.

In Freedom in Our Stories, I wrote about singing “Give me grace to see beyond this moment here; to believe that I have nothing left to fear. That you my God are greater still.” I knew the words were true; that didn’t make them easy. How was I not supposed to fear when my youngest would have brain surgery in three days? I didn’t know if he would survive, and didn’t know if I would be planning a funeral in four days. I couldn’t hold it together.

What I didn’t share in that post was the imagery in my mind of being in our church, picturing a funeral and receiving those who would come. I had to push away those thoughts, which leads to the next question.

How did I overcome that?

As I reflect and try to give a conclusive answer, I realize it’s not that easy. In something so large and supernatural that only God can perform, how does one put words to describe the infinite peace and calmness we felt in those moments of turmoil? I guess that’s why Philippians tells us it’s a “peace that transcends all understanding.”  We absolutely felt God’s peace as we talked and cried on our couch on those evenings. We definitely felt the prayers being lifted up on our behalf. I now pray for peace for any person/family going through difficult times. It’s the prayer that helps the most, despite the outcome.

Although it may sound irrational, my biggest fear was that because I had so much peace surrounding the idea that he wouldn’t make it, I almost believed that he wouldn’t. That was very scary for me; but not a paralyzing fear that I often have for things so much smaller than a life or death situation.

I wish I could say that after being in that situation, where I truly and without a doubt gave my son to God, that I’m now an expert. Quite the opposite. I don’t want to give the impression that giving it over to God was easy. I think that in a situation so big and so obvious I couldn’t even attempt to try to fix it myself, there’s not a whole lot of other options. So in that sense, it was easy. To this day, I feel more stressed when we have an upcoming MRI than I did those days before brain surgery. Goodness, I feel more stressed trying to finish up our schooling and having supper on the table at a decent time each evening!

This to say, based on my experience, I’ve found it easier to trust God in the big things than in the day to day mundane life that just happens. It’s something I’m still working on…