It’s been about six weeks since Josiah started his growth hormone shots. 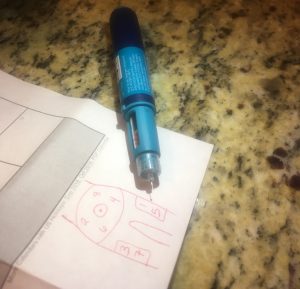 We call Josiah’s growth hormone shot a “pen poke” because it’s not like a shot or vaccine you get at the doctors office. It’s actually a pen that automatically dispenses his dose for us. We put a new needle on the pen each time. The needle is really small, smaller than the size of the point of a thumbtack. It only goes through the skin, not into the muscle. So, comparatively, it’s not as big of a deal as an actual “shot” one gets at the doctors office. We wanted to distinguish between the two, so pen poke it is!

To give the injection, we put the needle in his upper/lower thigh or one of four spots around his belly button (also in above image), push the button on the top of the pen, and then count to 10. The counting to 10 is the hardest part, the waiting. That’s when he cries the most. Then afterwards he’s mad because we’ve given him a shot. In fact, there were a few times he told me I didn’t love him because I give him pen pokes. Talk about heartbreaking.

Administering the growth hormone shot is supposed to be “part of a bedtime routine, similar to brushing your teeth at night.” That just sounds like a bad joke. We were also told to give him as many options as possible when it came to giving him the injections – does he want to get it on the couch, in his bedroom, etc… He told us one night he didn’t want to do the pen poke at night, so we asked him when he wanted it. He looked straight at us with a serious face and said “I want you to take it back to the doctor.” So, apparently choices don’t work for him!

It was also suggested to do a sticker chart for “rewards” afterwards. He ran down the hallway crying that he didn’t want a sticker. There is no amount of encouragement, rewards (or bribes for that matter) that was going to cause him to change his mind. None.

The very first shot with the nurse wasn’t terrible, or at least as bad as I expected it to be. He didn’t know what was coming before we got started, and then it was time. He laid down on the couch and I gave him the injection while the nurse held him down. That was so hard because I was the one giving it as he yelled “I don’t want it, I don’t want it.” He cried for awhile afterwards, but that was to be expected. He calmed down fairly quick with a video. However, I really wasn’t wanting a 30 minute video to be part of a nightly bedtime routine…

As the days went on, he realized this was, in fact, part of his nightly routine. Our routine had consisted of baths and pjs, then gathering in the living room to discuss what we were grateful for that day. I started writing these down daily, and it’s been one of Josiah’s favorite things to do. He’s usually the first to shout out what he’s grateful for. And if we dare try to skip it to hurry along bedtime, he’s doesn’t let us get away with it. Then we pray, give hugs and kisses and they go on to bed and we follow to tuck them in.

We decided to do the shots when the other kids went to bed, before we tucked them in, so they wouldn’t be in the room. After baths Josiah became a different kiddo. He pouted and moped around. When it was time for gratefulness he would cross his arms and mumble “I don’t want to do gratefulness.” He wouldn’t even give us hugs and kisses. We’d give his pen poke and Nathan would find creative ways to calm him, although it usually ended in a wrestling match of sorts, and the other kiddos would find their way back out into the living room for some pre-bedtime fun. Not the best nightly routine.

It Gets Worse Before it Gets Better:

It was rough for the first few weeks. And seemed to get worse as time went on. I vividly remember one specific evening he was adamant about not getting his pen poke. He screamed and Nathan had to hold his arms and body, while I held his legs and administered the poke. That was only a few days before I went to Dallas for Declare, and at that point, I really didn’t want to go and leave Nathan by himself to do the pokes. I wasn’t sure how it would even be possible.

Then the first pen was used up and we had an idea. We asked if he wanted to give someone a pen poke when he was done getting his. He lit up. He’s an ornery little guy! He usually chooses Ruth Ann. He will wipe her leg with the alcohol wipe, then take the lid off the pen and holds it for 10 seconds on her leg. (Currently I don’t think he realizes theres not a needle on the specific pen we give him, and hopefully this continues to last!) Anytime he gets upset about the pen poke, we simply ask him who he’s going to give it to when he’s done and that distracts him enough (he laughs and names his person) to get the pen poke himself! 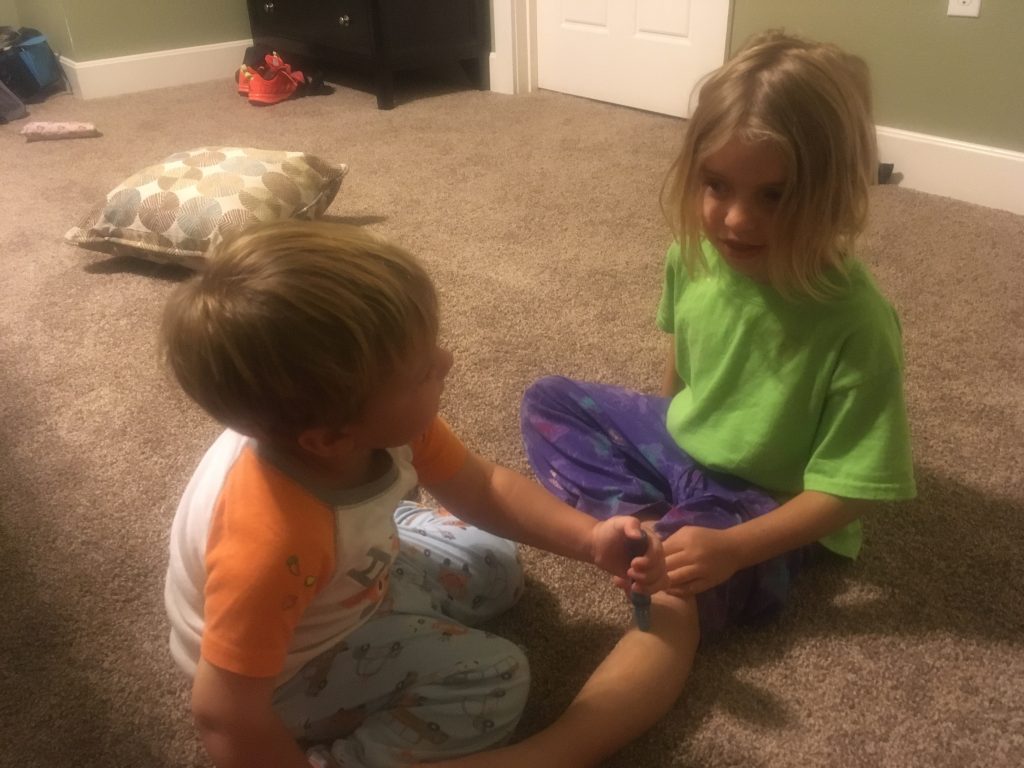 Over the last week, Josiah hasn’t even cried when getting the pen poke. I think he’s realized it doesn’t hurt too bad.  The best part is he doesn’t cry out of fear and anticipation anymore. He does ask every night if he’s going to get a pen poke. We hesitatingly tell him yes, but it doesn’t turn into a crying fit anymore, for which we are very grateful!