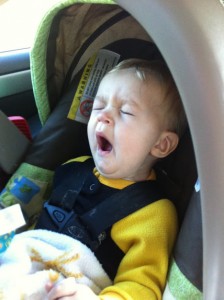 Three years ago today we were FINALLY discharged from the hospital following Josiah’s brain surgery. 28 days of unexpected hospital living were done! Here’s an excerpt from my journal of that day, and the excitement surrounding our arrival home.

When we got home, we rang the doorbell for the kids to answer. They bombarded the door, yelling “Josiah!” We couldn’t get in the door! They were very excited to see him, and he seemed excited to see them as well. I was a little worried about how well he would do since he had just drifted off to sleep right before we got home. He was a little fussy at first, but then realized where he was. I was holding him in the chair and he leaned forward; Nathan and the kids had gone out to unload the car. I put him down to “walk” (with me supporting him under his arms) and he headed that way! When he got to the door, he sat down, something he always did. He went outside and “walked” to the swing, to the edge of the sidewalk, sat down to play in the mulch, and headed back in. He attempted to climb up the step, and seemed really eager. Had it not been brick, tile and concrete surrounding him, I would’ve left him alone to try. 🙂 I took him into the room with all the toys and he seemed super excited. I was amazed at how much he did! In the course of the afternoon, he has been pushing with his right arm, scoots forward towards his goal, and is very close to being able to go from his belly to sitting on his own. In fact, by the end of the night, he was even closer! I’m not sure how long he was awake, but definitely longer than any length he had been awake at the hospital, and absolutely less fussing; as in, none! When he did get fussy, I took him to his crib. When we got to the room he already seemed to be more calm, and I laid him down and he went right to sleep. I suppose if one good thing has come of this, he goes to sleep on his own. 🙂

When Josiah came home he was like a completely different child. It was amazing to see the transition. 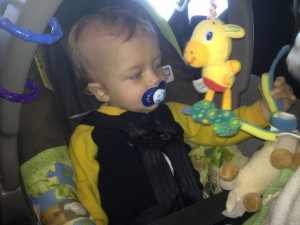 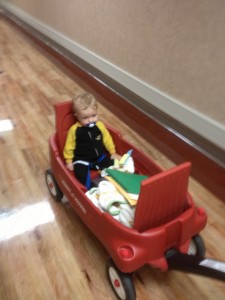 Nathan is awesome at taking these types of situations and turning them into an analogy. This is his style of sharing; not so much mine. When I do write an analogy type post, it’s usually a very long process for me. It’s not that I don’t see the analogies. It’s that I have a hard time gathering the ideas in my head, transferring them to writing, and if that wasn’t difficult enough, I then have to make these ideas make sense to you, the reader. Not my strong suit! It can be done, it just doesn’t come easy to me, and I don’t enjoy it near as much. But those usually end up being my favorite posts, so I enjoy his encouragement and stretching me to write beyond my comfort zone.

Because telling a story is more my strength, I’m going to leave you with the memory of coming home after almost a month in the hospital. And I’ll continue to work on the analogy that at one time made sense in my head…  🙂