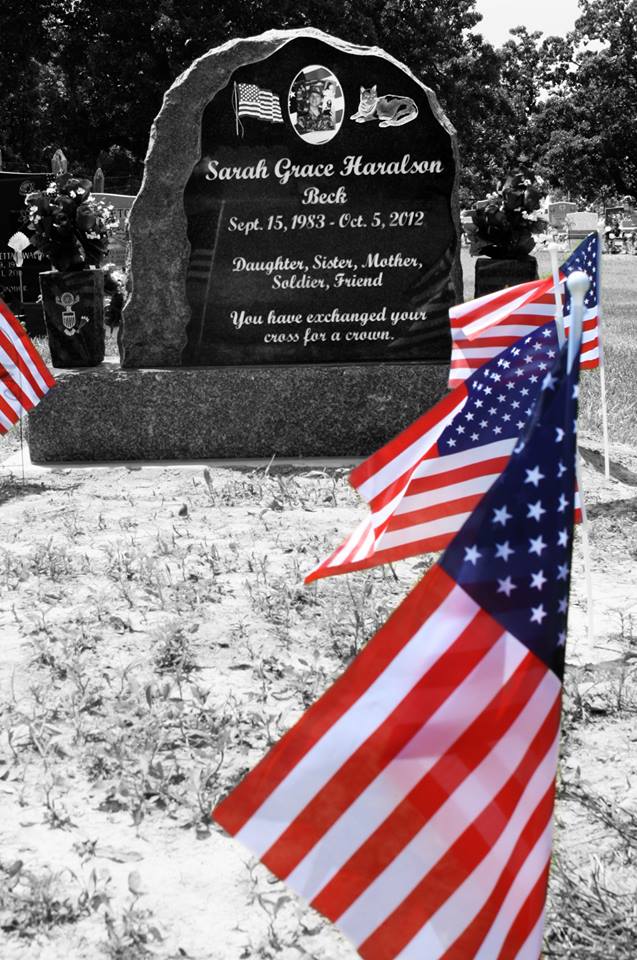 Three days ago I wrote about my cousin, Sarah Grace. Three years ago today was her funeral.

September 26, 2012 was the night it hit me very hard that my closest cousin was not going to beat the cancer (brain tumor) she was abruptly diagnosed with just months prior. I had been in denial, keeping myself busy with the day to day duties that a mother of four young children has. As worship time started that Wednesday night, the band sang “Forever Reign” which was one of my favorite songs at the time. I made it singing through the first part of the song, but as we neared the words “You are life, you are life, in you death has lost it’s sting” I lost it. My best friend was standing next to me, and as she hugged me, I bawled into her shoulders as I let the reality of the situation permeate every part of me. I felt myself running to His arms as those words were being sung around me-because I physically could not sing. That night I had finally come to a peace of my cousin’s situation; looking forward to seeing her that weekend. Unfortunately, I never saw her again, nor was I able to attend her funeral, because what happened the following day took us all by surprise.

The next day, September 27th, Josiah, at 10 months old, had an MRI, which we assumed was a routine test before the ophthalmologist appointment that was scheduled the following week. We weren’t supposed to have the results immediately. However, immediately following the MRI, I was told that the MRI showed a mass in his brain. I was stunned; having just come to the reality my cousin was dying of a brain tumor the night before, and now my youngest son was just diagnosed with one.

The six days between the MRI and surgery were the hardest days of my life. On Sunday we attended church and I found myself unable to sing out any of the words of the songs. It was so frustrating to me, because God had given a peace by that time, and I wanted so badly to sing out my praise to him in the midst of all the pain. But no words could escape my mouth. Praise and worship is my absolute favorite, and it was so very frustrating to me to be physically unable to sing. So I closed my eyes and sang with my heart; ALL of my heart; like I’ve never sang before. God met me through the deepest worship experience I have ever encountered.

The last time I talked to Sarah on the phone was Friday morning, September 28th – the day after Josiah’s MRI. She told me she was doing about the same as she had been the previous week when I last saw her. She asked about Josiah, and I told her “Sarah, he’s just fine. You saw him a few days ago, he’s not changed. What’s changed is what we know about him.” We visited for a few minutes before she was too tired to talk anymore and was going to take her morning nap.

Saturday, September 29th, I learned that Sarah had taken a turn for the worse and they were taking her to the hospice house. That day was so hard. It pained me to not be with my family; to miss the last days with my cousin whom I was so close to as a child. Knowing that I would never see her again.

Wednesday, October 3rd, Josiah had his surgery, and I was told when Sarah heard the news that Josiah’s tumor was not cancerous that she looked relieved and relaxed. Thursday night I decided to face-time with my aunt (Sarah’s mom.) I was hoping to get to see Sarah and maybe say hi. She told me that Sarah had a good afternoon, but now was not responding. Friday, October 5, exactly 6 months after learning about her cancer, Sarah passed away during the wee morning hours.

Sarah had told one of my cousins, “I’m giving Josiah my miracle.” Even in her last days she was thinking of others. Sarah fought hard. Life was not easy for her; even during the days before her fight with cancer. She was strong, and I miss her so much.

I missed her funeral. I had seriously considered the idea of leaving the hospital for the day to attend her funeral, but when we were awakened by the x-ray machine in our room at 5am, I knew leaving wasn’t a possibility. The results from Josiah’s x-ray were fine, but we also learned that through the night Josiah had spiked a fever. We were also informed that there was more damage done to his pituitary gland, which meant adding two additional hormones to the one he was already taking. A day full of doctors and uncertainty was not a day to be leaving the hospital.

Finally, six months later, I visited Sarah’s grave. On April 5, 2013, I watched the picture slideshow that was played at her funeral. I was given the CD while at the hospital with Josiah, but I had never been able to bring myself to watch it. That night, one year after learning she had cancer, and six months after she passed away, seemed like a good time to do it. I sat down with a box of kleenex and watched it over, and over, and over. Smiling at the memories, crying at the memories, and smiling and crying some more.

It took over six months before I was actually able to make it through “Forever Reign” vocally again. Even three years later it is still a difficult song to sing and I can’t always physically sing it, but my heart has no problems singing it out to Him. God continues to meet me through worship, whether it’s an old hymn or a new praise song, and especially those songs that were sung three years ago as I struggled through the hardest season of my life.

God is good, and He’s always there. Even when we can’t be.