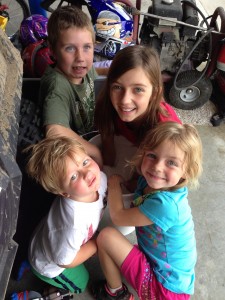 Tonight as we sat in the living room before bed, Nathan started giving us some riddles to solve. The kids absolutely loved it! I was impressed with how many they figured out on their own. Ruth Ann had a grand old time shouting out random answers and Josiah enjoyed building with his magnet blocks and laughing right along with us.

As we were doing riddles, I had Nathan look up two that one of the doctors told while we were at the hospital for Josiah’s botox a few weeks ago – which reminded me that I hadn’t posted an update! It’s been a bit crazy around here…at one point, we had been home a total of 4 out of 19 consecutive days. A friend said “Wow, that’s nuts.” Another friend responded, “I think she said you’re nuts.”  I think they’re both right… 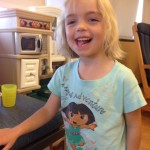 Josiah had Botox in his right arm on July 29th. Our appointment was pushed up from 2 to 12:30, which worked out great for us. Because Nathan was out of town, my mom and Ruth Ann came along with us so it wouldn’t be just me. It’s always helpful to have someone along at the hospital to help distract Josiah. He’s usually done with me after I help hold him for the IV. 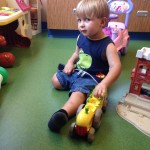 When we got to the children’s procedure suite, I was glad to not be by myself. This was the first time we had been back the same place Josiah went for his very first MRI – the one where we learned about his tumor almost three years ago. Although we have walked through the area, we hadn’t been assigned a room there or played in that toy room since that day. When we walked in, we saw the nurses as well as the doctor who was doing the sedation. I absolutely love walking into the hospital and knowing who is taking care of Josiah. They’re always so happy to see him and how well he is doing. Josiah even had several nurses stop by just to tell him hi. 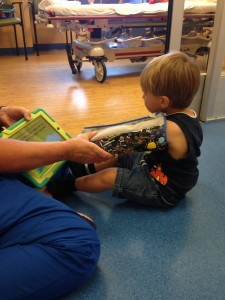 Josiah wasn’t happy to get his vital signs taken, but Ruth Ann went with him and went first. The nurse took his vitals while I filled out the paperwork. He did not let them take the numbing cream off, and instead of going to a room, he opted for the playroom. He enjoyed playing with the different toys, and did ok while getting an IV in his arm when it was time for that. It took four of us… one nurse to hold his arm, one to place the IV, the child life specialist with an iPad, and me holding Josiah on my lap. He did great, and stayed mostly distracted with the iPad. When it was done, he wasn’t ready to be finished with the iPad, and since he really couldn’t play with any toys, he was allowed to keep it. The IV had gone into his left arm, and a support was placed over his arm to keep him from bending it. The iPad helped keep him happy until it was time for the sedation.

My mom and Ruth Ann went to the cafeteria to eat some lunch while Josiah and I went into his room. He was very upset, but it didn’t take long for him to be asleep. Once he was asleep I laid him down and was ready to sit in the chair out of the way when they asked if I would want to hold his arm and hand while they administered the Botox. So I got to help and see up close what they were doing! I’m thinking I should’ve gotten a medical degree… 🙂 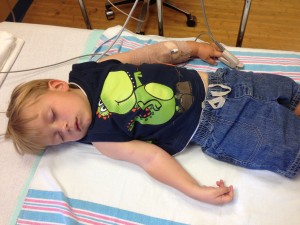 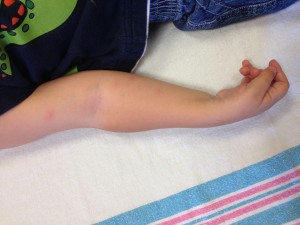 When they were done we worked on scheduling more Botox for December, when he’s sedated for the next MRI. I love that we can do this so he doesn’t have to be sedated more than once. It was an easy thing to add, and we only have to come in 30 minutes earlier. 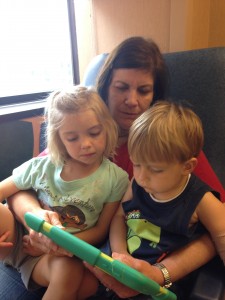 Josiah slept quite a bit afterwards. My mom came back with Ruth Ann and brought me lunch. When Josiah woke up, he drank his chocolate milk and was ready to go. He might have opted to stay, because he did not want them to touch his arm to take the IV out. That, and he was entertained with the iPad again. There were no problems taking out the IV, and as we walked out, the nurses gave Josiah and Ruth Ann each a stuffed animal. They were both so happy! Josiah picked Pluto, but has named him Spike. He’s kept it in his bed and will request it if its not up by him when he goes to sleep. 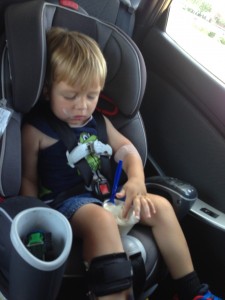 After we left the hospital we went by the store and pharmacy. We had to wait another ten minutes for the medicine to be ready, so we did what anyone would do…we got some ice cream! Josiah insisted he wanted vanilla. I don’t think he actually ate any, but had a great time putting his hand in it. He was strapped in his carseat and was a mess! But hearing his little giggle and “oooh it’s cold” was enough to make it okay. That, and it was good therapy for him I know! He usually dislikes the textures of soft foods and refuses to eat them. The exposure was a good thing. The mess, not so much.

We’ve already noticed the Botox helping Josiah’s arm and it’s been great seeing it more relaxed. Now we work on building up the muscles and helping him use it more. He’s doing great!