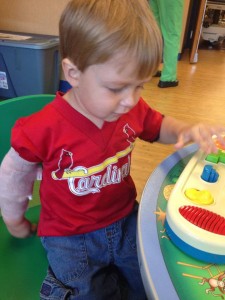 MRI results were good! It did show a possible sinus infection, but we were prepared for that, considering all the coughing and snot running out of his nose! 🙂

We started out the morning by sleeping in! Because the MRI was in the afternoon and he could eat/drink until 9:00am, we had no reason to get up at 4am to eat and take meds.

After breakfast and getting ready, Josiah and I headed into town to get his haircut. Everyone at the hospital noticed and loved it!

After his haircut, we stopped by the house, picked up Nathan and headed to the hospital. He was happy as could be. He looked at the receptionist, and said “she gets me pancakes…after the doctor says it’s okay.” WOW, his memory is amazing! He also gave her a fist bump, complete with a “fa la la la” finger wave up. If you’ve seen Big Hero 6 you can now picture what he does. Josiah was taught well by his big brother!

Josiah did awesome in the exam room, helping to hold the stethoscope, and allowing the nurse to take his blood pressure! This was a first that he was not screaming and fighting the cuff around his leg. He played with bubbles happily. He knew where to go to get his weight and height, and on the way back, he tried to slip by the exam room door to go on into the playroom. It didn’t work.

Placing the IV was an interesting experience. He played great on the iPad and was very distracted, but apparently the numbing cream did not work, because as soon as the needle was placed, he jumped and swung his left arm over to the right and actually helped shove the needle into his arm. He’s got quite the bruise now. We didn’t use tape on his arm because his skin is so sensitive to it, but wrapped it, and it worked great.

He played in the playroom and was very happy. He wasn’t interested in riding on the stretcher this time, and was not too happy to be down in the MRI room, but it didn’t take them long to give him the meds and he was asleep. 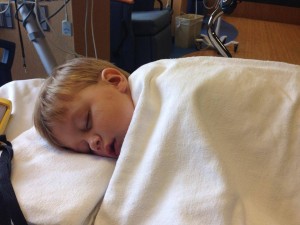 Nathan and I grabbed some lunch from the cafeteria and ate in the waiting room. Josiah was done after 30 minutes and we headed back up to the cancer center to wait for him to wake up. He was pretty out since it was naptime, which usually causes kiddos to sleep longer with the sedation.

Unfortunately, there was a mix-up with the kitchen and ordering his food, so his pancakes were never delivered, and when the problem was in process of being corrected, we had to leave to get to the neurosurgeon appointment across town. He was happy with graham crackers and chocolate milk when he woke up though.

The appointment went well with the neurosurgeon, and we were able to see the pictures. She said there aren’t very many views (angles) where the tumor can even be seen anymore, which is totally awesome! The tumor will always be there; just not always visible. If it’s not visible-it means that the cells are not active (to the best of my knowledge and ability to explain simply…). 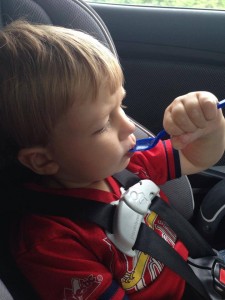 We stopped by Culver’s to get some ice cream on our way home, which has become tradition I suppose after an MRI, and all the weeks after chemo. Josiah has started eating a little more variety in his foods lately, and actually wanted some ice cream. It was good to see him enjoy it!

Josiah has met the first milestone—one year post-chemo, which means MRIs are now every six months! Thank you, thank you, for your constant prayers and support!