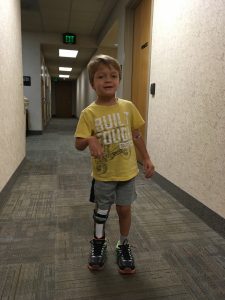 June 27th was botox day. Josiah’s right wrist and elbow had been getting pretty tight recently. The last time we did botox in February, it was focused more on his right calf muscle. He’s responded well to that, and is doing great with his new leg brace. (more on that in a later post!) We’re hoping the botox will help relax some of the muscles in his wrist and elbow, and that we can focus on strengthening the other muscles he’s not been using.

All in all, getting the botox went well.

Many of you know we’ve been working on building a new house. We had several contractors who were scheduled to be at the house, and to reschedule them would put us farther behind with moving in than we already are. Because of that, we opted for Nathan to be at the house instead of coming with us to the hospital. On a side note, we do have internet at the house now, and Nathan and his intern, Daniel, have enjoyed working every day outside on our deck. It’s great because Nathan can continue working with PBT while being available to the contractors if needed. And he also enjoys the nice weather and wildlife in our backyard! (Note: with the warmer weather this last week, Nathan and Daniel have moved their office down to the basement where it’s much cooler!) 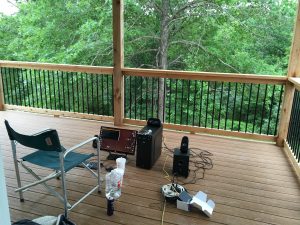 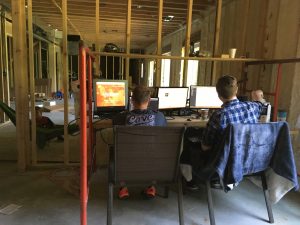 Grace was at church camp helping out with the younger grades and a friend took the other two kiddos.  My mom came with Josiah and I to the hospital. Josiah said that he was grateful he got to see his grandma. He enjoyed playing when we got to the hospital, and we were able to distract him with the iPad to get him into his room. When it was time for the IV, he wasn’t thrilled and it was very difficult to distract him. After two pokes, the IV was in, but not secured. He started kicking and screaming, but once he was told if he kept moving he’d have to have another poke, he settled down so they could tape it down. Thankfully, the iv still worked and we were able to use it without having to do another poke. He also calmed down after that. 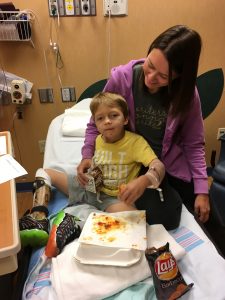 Once Josiah was sedated, they did the botox, and he slept for awhile after they were done. When he woke up, he was ready for his pizza, chips, and chocolate milk. When it was time to take the needle out, he told the nurse, “Oh no you don’t!” I’m not really sure where that came from, but he used that phrase the rest of the day. He sat and let the nurse take off the bandage and even let her put a bandaid on. I’m sure it helped that it was a paw patrol bandaid!

Along with the botox, Josiah will be fitted for a brace for the elbow. The brace will be custom made, with hinges, similar to his leg brace. I’m hoping he will tolerate this well and that it will help in keeping a good stretch in his arm. The plan is to have him wear this brace overnight. Once he is fitted, it will take about 4 weeks for us to get it back to us.

If this brace doesn’t work, the other option we have is to cast the arm. It’s not something the doctor likes to do in the summer, simply because a cast means no swimming or water, which is certainly no fun in the summer! He’d basically have a cast on his arm for 1-2 weeks, giving the arm the long-term stretches he would benefit from. Again, hopefully this new brace works and Josiah will wear it overnight and not affect his sleeping!

We dropped my mom off and went to pick up Ruth Ann and Samuel, and ended up staying and visiting with our friends for awhile. It was a great way to end our day!