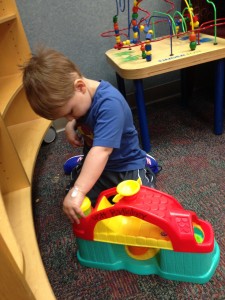 Josiah had Botox last week and it went really well. We started the morning with going to the orthotic clinic to make a small fix on his brace. There is a house being built across the street from us, so when we got home, we stayed outside to watch the construction workers and machinery. Josiah had to be at the hospital at 11:30. When we got there, we went up to the procedure suite and he darted off to where the toys were. After getting him back, they did his vitals and put the numbing cream on his arm. We then went downstairs to X-ray. The endocrinologist had ordered an X-ray of Josiah’s hand to do a bone age check. Josiah did a great job with the X-ray. (The results of the X-ray were normal, with bone age showing 4 years. He is scheduled to have growth hormone testing on April 26th.) 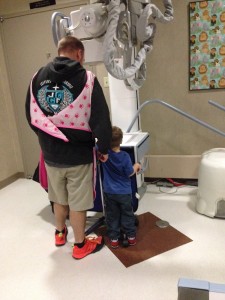 We then went back up to the procedure suite and he played until it was time to get his IV, around 12:30. The child life specialist did great, but it’s really hard to keep him focused on something else when the nurses are holding his good arm. It’s helpful when not getting botox, because his right arm can be used for an IV, and he hardly even notices because he’s so busy with the left hand playing. When his good arm is taken away, it’s hard for him to be distracted. After the IV was in and blood was drawn (all of which went really smooth), he was playing with the Talking Tom app and held his arm up and said, “See, I got a needle!” Then he was given the sedation meds and he was out. 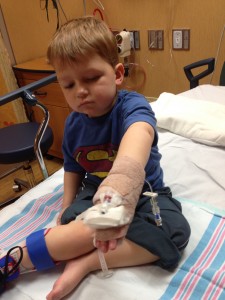 Josiah only received the Botox in his arm and hand. It was discussed to put some in his leg, but the doctor was happy with how well Josiah was doing with his new brace, she didn’t think it was needed at this point. Josiah has a bone that causes his foot to turn outward, and she said that a little bit of stiffness in his leg is not necessarily a bad thing at this time. As long as this bone does not cause any troubles with his activity and walking, the plan is to wait until he is older (ideally around age 10) to address this issue with surgery. Right now, it doesn’t seem to slow him down much. 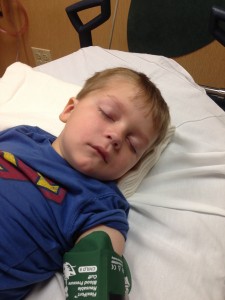 The botox was done around 1:10 and we just waited for him to wake up. He woke up around 2. When it was time to take the IV out, he didn’t want the nurses to touch it or take it out. They don’t use a lot of tape on his arm, instead they use a wrap to keep the IV in place and his hand straight. As they pulled this off, Josiah said, “Wow! It doesn’t hurt!” They use a small amount of steri-strips and a special tape directly on top of the IV, so the nurse brought a spray to help take the stickiness off so it wouldn’t hurt as bad. He was apprehensive of the spray, but eventually consented when we told him it would make it not hurt. He was impressed with that as well. He ate some hotdogs, chips and a cookie, and we were out the door a little after 3:00. We had a great day, he woke up feeling great, and when we got home he was ready to dye eggs and celebrate Samuel’s birthday with my parents! 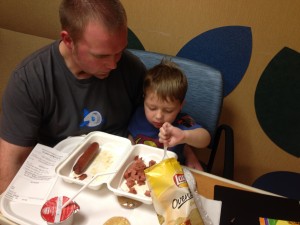