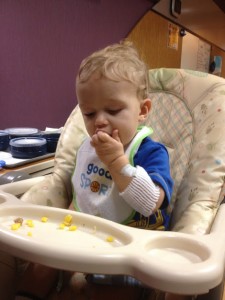 October 28, 2012 we finally moved out of the Pediatric Intensive Care Unit and into the regular pediatric floor! 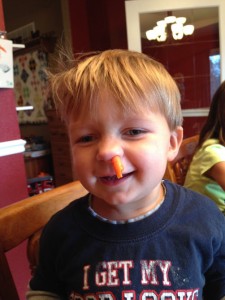 October 28, 2015 Josiah is home, sticking carrots up his nose. He doesn’t usually smile like this for pictures…

When Josiah had his surgery, doctors weren’t sure how the tumor and stroke had affected his brain. We were told that it could be years before we know the full extent of the damage that was done. Many things, they said, we would not know until he was school age. We know about the lack of vision and weakness in the right side.

Currently with therapy, we are working with Josiah on identifying colors, shapes, and spatial awareness (over, above, on, beside, behind, etc), and if objects are the same/different. It is so hard to tell what he knows and what he doesn’t. One of Josiah’s therapists says that Josiah is the master of distraction. I would agree.

When we try to get him to focus on a certain activity, he distracts by looking up at you and saying, “hey you know what?” and proceed to tell you a story of sorts. He loves to talk to people! We have to add an extra 5-10 minutes to our schedule before and after therapy just to give him time to talk to the people who are walking in/out as we go.

We have added speech therapy in the last couple of weeks and through a conversation with the therapist, there are some things in Josiah’s speech that are consistent in individuals who have suffered a stroke. Here’s an example – from that very day his language was discussed.

As we left therapy that morning, Josiah tripped and scraped his hand on the ground. As I put him in the car, he looked up at me and said, “I need you to put blood on it.”

As I buckled him in, I reassured him I would take care of it whenever we got home, then asked “What do you want me to put on it?”

His answer was “Medicine.”

He had no idea he had confused the two words.  We’ve noticed several similar instances where he seems to confuse words, without even realizing it.  That makes it really hard to know if he is unable to learn the concepts or if he’s just unable to verbalize those concepts.  Throw in the lack of vision along with his master distraction abilities, and we really have no clue! 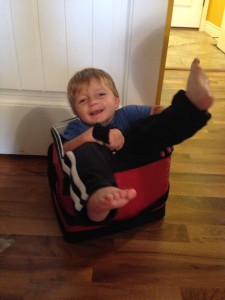