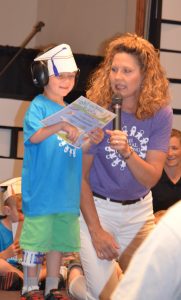 Last night, Josiah graduated from preschool. He is super excited to be a kindergartener! Graduation went wonderful, even with all the applause! I did have him wear his headphones, and they worked great. He was as happy as could be going up on stage to get his certificate, and then singing three songs with his classmates and the others graduating as well. I am super proud of this boy and all he has accomplished in his 5 short years, and look forward to all that he will continue to accomplish. He makes me smile, and I pray he never loses his joy for life. 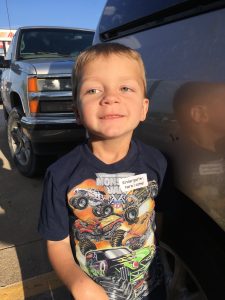 We had Josiah’s IEP meeting on Monday, and that went really well. He will be in a kindergarten special education class, which sounds like a perfect fit for him as he adjusts to the daily school routine. He’ll get his therapy first thing in the morning, then be in the classroom for a half day. He still naps regularly, especially on days he has school or therapy. Now that he’s combining both of those on the same day, and be in the school setting an hour longer, I’m anticipating him to be more tired than usual. It’s our goal, that by the end of the year, he is able to attend a full day. But we’ll take it one day at a time and see how our little guy does! 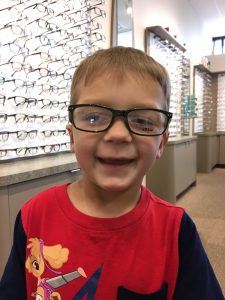 Josiah now has glasses! He isn’t wearing them often, as we are working to get him to tolerate leaving them on for more than a few seconds at a time! He thinks they’re super cool because they’re green (on the inside), but isn’t a fan of keeping them on. We noticed at therapy today that they helped with his head shaking (to focus) and he didn’t have to be as close to the iPad while doing his activity.

Hopefully we’ll be able to increase the time he wears the glasses over the summer and by fall, he’ll be ready to wear them at school. I am shocked at the difference it made for him. I hope he will soon realize this and want to wear them. (This really only helps with the eye that still has vision. The other eye, which he calls his “dark eye,” isn’t helped by glasses, as he sees nothing with that eye.) 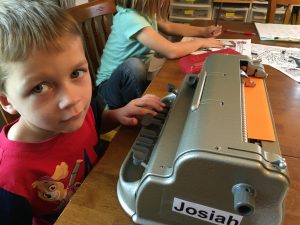 Josiah has a braillewriter so he can begin to “scribble” by making braille letters on his own paper. He loves being able to load/unload the paper and push the buttons. He’s starting to work on identifying the different parts of the braille cell, which is the first step to learning the letters. Josiah is very excited to learn! This braillewriter is an older model. Most braillewriters require the use of both hands. This one is unique, in that it is a uni-brailler, meaning he can braille with one hand. It’s somewhat similar to a typewriter. 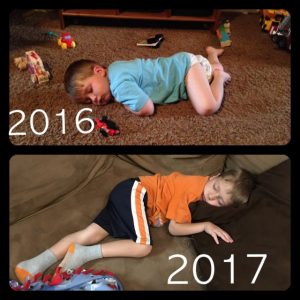 Last week Josiah had a visit with the endocrinologist, who monitors his hormones. He is pleased with Josiah’s growth and we are going keep him on the same amount of growth hormone, and none of his other medications have changed. He also had a bone age scan, which is an X-ray of his hand. It’s amazing how much he has grown in a year!