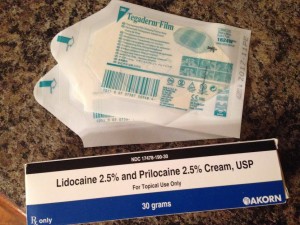 Today as we were finalizing plans for tomorrow’s MRI, we told Josiah that he would be going to the hospital for a doctor appointment. He asked the question he always asks before an appointment – “Mommy, I’m not going to get a shot?”

I explained that he wouldn’t be getting shots, but instead a needle in his arm.  I told him I could put some medicine (numbing cream) on his arm so that the needle wouldn’t hurt.

Apparently a band-aid is a little more traumatic than shots, needles and numbing cream. You never know with this kid!