Josiah picked up his new leg brace back in June. His appointment was at 10:00, where they tried the brace on him, made marks where the brace needed to be cut and trimmed. We then had about 4 hours of time to kill in Columbia before we could go back and have the final fitting and pick it up.

It was just Josiah and I. First, we went to Home Depot so I could look for lights for our new house. It didn’t take Josiah long to find the tractors! He enjoyed being able to wander and was quite “helpful” as we looked at lights. 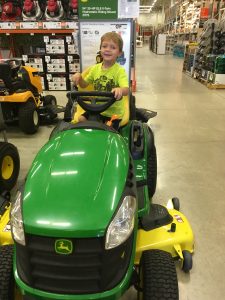 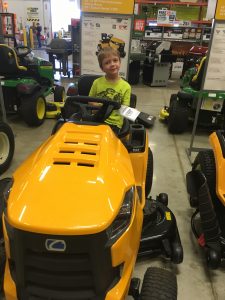 After that, we went to Chic-Fil-A for lunch since it has a play place. When he was done playing there, we went to the park. Thankfully, we didn’t have long at the park because it was pretty hot outside! He went down the slide a few times and enjoyed swinging before it was time to head back to the orthotist.

Josiah was excited about his new brace and getting to take it home. We spent about an hour there to make sure everything fit and there were no pressure sores or problems. Afterward we went to the shoe store and he picked out his own shoes! He was convinced he needed shoes that tied because his sister has shoes that tie. In his size, finding shoes that were not velcro really narrowed down the options. We finally found a pair that worked with the brace and okayed by Josiah. He’s pretty proud of the brace and shoes and hasn’t had any problems wearing it! I’m so thankful, because he went about 3 weeks without wearing a brace, as he grew out of his old one while in Dallas. 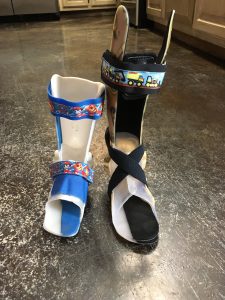 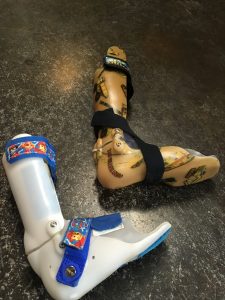 He just got the Paw Patrol last fall, and it was made big so he could grow into it! The construction brace is a little bigger but not so big that it doesn’t work for him. 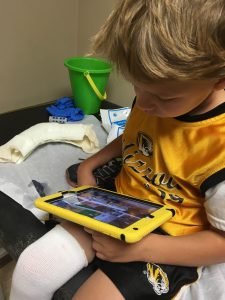 Josiah was also fitted for a new arm brace. His arm was casted and he did great! There was no anxiety about it at all, which was super nice. He’s so unpredictable! He will be getting a custom hinged brace for his elbow, similar to his leg brace. He even picked out the same construction theme.  (You can see the cast on the table behind him in the photo.)

Josiah is also going to be getting a hand/wrist brace to keep his thumb out and his wrist in the correct position. Hopefully he’ll be able to wear this brace during the day and night. This brace will also have an attachment for nighttime wearing that will keep his fingers stretched out.

It will be awhile before we get these, since it’s a custom order and will take longer to get approved with insurance, plus the time required to have it made and shipped. Hopefully it goes smoothly, because now is the time to maximize the brace and stretching since his botox is fully kicked in and working. We can already tell a difference in his arm – it looks much better, is less tight, and he allows us to stretch without it hurting him. He’s also back to wearing his old brace at night. (He was unable to wear it the last few weeks because his hand was so tight it wouldn’t fit into the brace.)

We are grateful Josiah is continuing to do so well! I’ll be sure to update when the brace comes in with pictures!