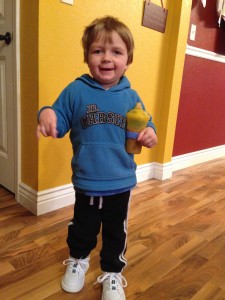 Josiah has a new brace for his right let/foot, a new insert for his left foot, new shoes, and a new arm splint and hand splint. The arm and hand splints are very similar to what he’s had in the past, just bigger because he’s grown! 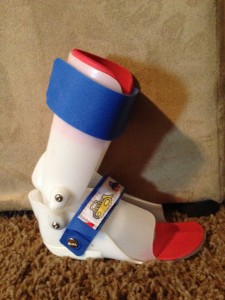 Our appointment with the orthotist yesterday went really well. Josiah wasn’t happy to go back into the room, but once he realized he was just trying on his brace and not having any casting done, he was pretty happy. While we were waiting in the room for the braces to be cut to his foot length, Josiah peeked out the door. He saw a man who was being fitted and walking up and down the hallway. With excitement, Josiah asked, “You have a brace to make you walk better too?” The man told Josiah he’s had braces since he was little like Josiah, and that the braces are more fun now because you can personalize them – his were always white. They had a nice conversation, and Josiah eagerly put his brace and shoes on, then went in the hallway to show the man. They both walked up and down the hallway together. It was the sweetest thing EVER! 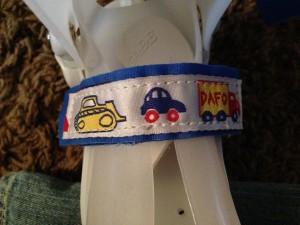 (Josiah personalized his brace with red/blue and a bulldozer, car and truck. Imagine that.)

We went to church tonight, and Josiah was excitedly showing off his brand new shoes to everyone! I’m so glad he likes them. His therapist this morning was pleased with how well he was doing with the new brace and shoes as well. 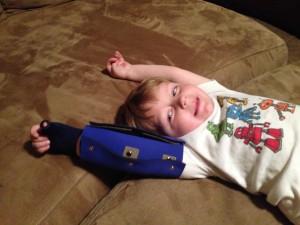 Here is Josiah’s new hand and arm splint.  The hand splint keeps his thumb from being tucked into a fist.  The arm splint straightens his arm and keeps it in a stretch.  He doesn’t like it much–I convinced him to put it on for a picture and he agreed only if he could take it off when we were done!

We have several things coming up in the next few weeks of March. Friday he sees the endocrinologist, who he sees every 3-4 months. They check his weight and height to monitor his growth and make any changes to his medications. He also has his thyroid levels checked, which means a blood draw.  (Link to appointment update)

Pending insurance approval, Josiah is also scheduled to receive botox on March 22nd. I’m not sure if it will be just his arm, just his leg, or both. Several options have been discussed in the past, so we’ll find out when we get there! He does need to be sedated for this procedure. Since they’ll have an IV in, I’m hoping to delay Friday’s labs and have blood drawn at the same time as sedation and only have to poke him once this month.

Therapy has been going well, and he gets to try aqua therapy on the 18th. He’s been constantly asking when it’s going to be warm enough to go swimming, so I’m sure he will LOVE it. Until he realizes it’s not a free swim…. We’ll see!

Finally, he has an IEP meeting later this month to evaluate his current goals and change them as needed.

Otherwise, we’ve been enjoying the nice weather and being outside! The change in temperatures has caused a bit of sickness, but thankfully nothing major. Josiah had about a week off of therapy because of his sinuses and nasty cough. The break was nice, but it’s much nicer having a kiddo who feels good enough to go to therapy and not coughing all through the night!