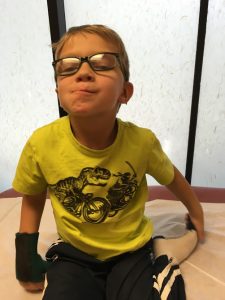 Josiah was scheduled to have an MRI in November. The morning of the MRI, Josiah woke up sick, so the appointment was cancelled. It has been rescheduled for next week, January 17th in the afternoon.

Josiah did have some serial casting at the end of November. It went amazingly well! Josiah did great with the casting process. He actually loved the cast being on (it’s more comfortable than his brace), and despite the loudness, loved the “tickle machine” that cut the cast off. He wore a cast for one week, went one week without, then wore a cast a second week. Between the botox and casting, his leg looks really good and two weeks of casting was enough! 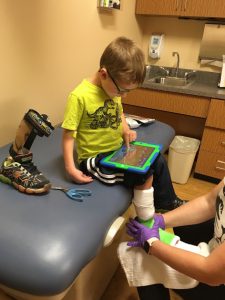 Getting casted for the first time.

Rocking out with his cast.  It didn’t slow him down any at all! 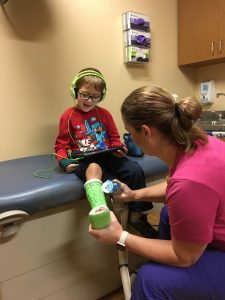 Cutting the cast off with the “tickle machine.”

We have decided to start doing Josiah’s Physical Therapy in Columbia. Since the casting went so well, we wanted to do some therapy to help strengthen and keep the movement in his leg. He had his evaluation last week and started yesterday. He loved it!  We love his therapists in town, but I think being in a new place and having new people to work with has been beneficial. The only downside is the weekly drive to Columbia.

January has been and continues to be a busy month for appointments. We took the month of December off from outpatient therapies, and it was a good break! He gets a minimum amount of therapy while he’s at school.  I had a wonderful month-long break from driving to and from appointments.

Last week Josiah saw the neuro-ophthalmologist. That appointment went well and there have been no changes in his vision. The University OT school has started up a vision therapy program, and the physical therapist who did the casting referred Josiah to the program. He had his evaluation this week and did really well. I haven’t received the write-up from that evaluation yet. They are unsure what the program will be able to offer as it’s just in the beginning stages, but I’m excited to have a local option for vision! All other options are St. Louis and Kansas City, but we’ve not had much luck with insurance coverage in those locations.

Josiah also saw the ENT and had a hearing test. Josiah had tubes placed in his left ear 5 years ago and his right ear 3 years ago. Both tubes have been out, just sitting in his ear canal for quite awhile. The ENT was able to get these out without a problem. Josiah loved the microscope! His hearing hasn’t changed, and because there are no longer tubes in his ears, we were released from regular appointments and screenings! 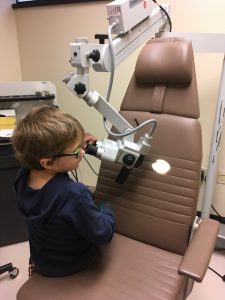 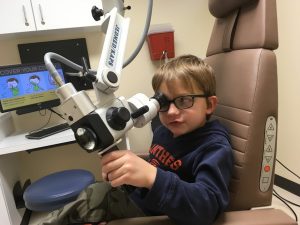 Finally, Josiah will be getting a new leg brace. He’s still able to wear his old brace, but by the time the new one comes in, he’ll definitely be ready for it. We’ll hopefully have that by the end of the month. He also had his “robot arm” stretched out, which means his arm is getting bigger as well! It’s so much easier to put on now. He’s been doing great with wearing it at night, and even though the botox should be out of his system, he’s not nearly as tight as it sometimes gets! That was very encouraging!

We’re also checking into getting a brace for his leg to wear at night. I hope it will have the same encouraging results the elbow splint (robot arm) has had. He will see the rehab doctor and a team of therapists/doctors at an all morning clinic visit at the end of this month.