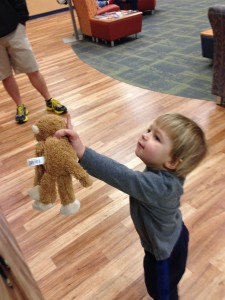 November was a month full of doctor appointments for Josiah. In October, Josiah started complaining of pain in his neck area. It wasn’t consistent and he simply grabbed the side of his neck, said “owie” and then went right back to playing. The weekend before we planned to take him to get checked out, we noticed what looked like dried blood coming out of his right ear. We took him to the emergency room that Sunday, where they said it was likely dark wax and possible dried blood. That week consisted of phone calls back and forth with his oncology team, with more substance coming out of his ear on Wednesday, and an appointment on Friday. This all happened the last week of October.

Josiah checked out well at the oncologist, and it was determined that it was not a result of the tumor and no MRI was needed. I didn’t think it would be related, but that’s the first place we start anymore. We then worked on getting into the ENT, and the earliest we could be seen was November 18th. Our family doctor got us in the following Tuesday (Nov 4) but was unable to do anything for Josiah. He said there was a hard wax substance in his ear, blocking full view of the eardrum. He gave antibiotic drops in hopes to help with pain and to loosen up the junk in his ear before the ENT visit to get the ear cleaned out.

Finally on November 18th we made it to the ENT. Josiah was unhappy to be there to begin with, telling the nurse “I all done at doctor!”. Little did he know that was the easiest part – waiting for me to tell all his health history and fill out paperwork. The ENT came in, and did her best to look in Josiah’s ear while I held him laying down on top of me. Even though I held him still and a nurse held his head, Josiah still moved too much for her to be able to get into his ear. By this point Josiah was mad, yelling “I all done at doctor! I want my daddy! I all done! Mommy!” Getting up didn’t help any, because that’s when they brought in a papoose board, and he screamed the whole time they were preparing it for him. I laid him down on a board, and used velcro to attach him onto it, completely, from the neck down. The nurse then held his head still and all I could do was stand by and tell him they were making the owie go all gone. While the process seemed to take forever, I’m sure it was no more than five minutes. They pulled out some chunks of dried blood and then a larger chunk, which was his tube that had fallen out, covered with dried blood. The result: Josiah’s tube fell out of the eardrum, but not out of his ear. He then had a bad ear infection, eventually resulting in the eardrum rupturing, which is likely where the blood came from. Because there was still fluid behind his ear, it was recommended that he have surgery to place another tube in that ear. His left tube was still in and functioning. 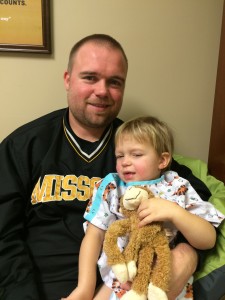 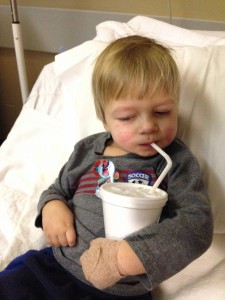 Josiah had surgery Monday, December 1 at 7:30 am. After the surgery he was transported to MRI to get that completed so we only had to put him out once. (The original MRI was scheduled for December 3rd.) I’m so thankful they were able to get it all scheduled at one time. The surgery went well, and the MRI results were positive, stating –

“No evidence of disease.”

That’s the biggest thing that’s happened. Other appointments included IEP meetings (for therapy), chiropractor visits (to help with sleep!), a well child checkup (including the flu mist), and an appointment with his rehabilitation doctor. She was very happy with how well Josiah is doing, and said he’d changed so much since she had last seen him. She recommended getting an x-ray of his hips so we can have a baseline picture, so we can see if there are any changes as he grows. Everything is fine now, but as he grows there may be problems that might need to be addressed. I also got new prescriptions for therapy and a referral to go to a functional vision assessment in Kansas City. I still need to call on these as we’ve been super busy and out of town quite a bit recently.

Josiah also started with new therapists after turning three. He was excited when I told him that therapy was coming, but showed his displeasure when someone new walked in the door. He’d shrug his arms up against his chest, and say “hmph, I want Terri, Lisa.”, then he’d run across the room and bury his head and pout. By the end, he had warmed up to them though. He’s only had a week with them, so we’ll see how it continues to go! 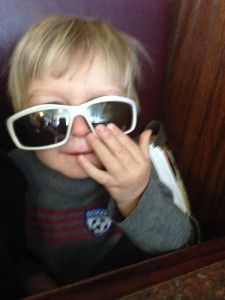