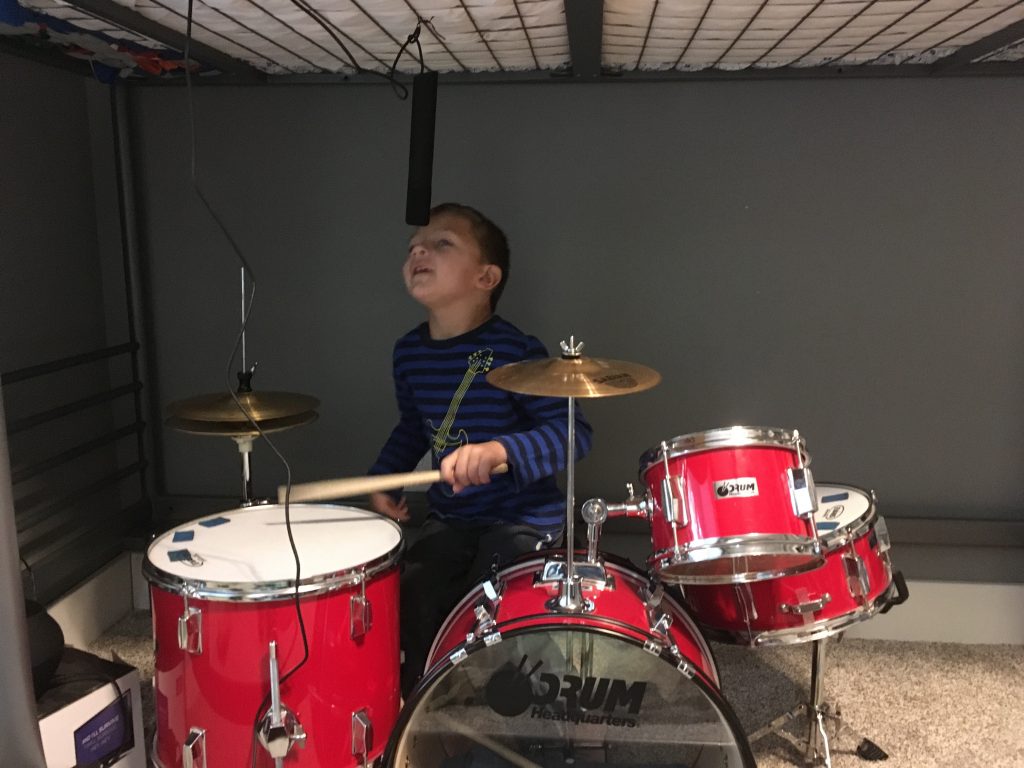 Josiah’s been doing great in Kindergarten. He loves it and is learning lots! He’s even been going for a full day, although several times a week he’s asleep before we even leave the school parking lot! Most days we’re able to wake him when we get home. Other days, he sleeps until after supper. When he wakes up, we feed him and put him back to bed when we go to bed. Thankfully, he goes back to bed really well. Unfortunately, he wakes up at 5am or earlier ready for the day!

Three Arm Braces and Growing out of his Leg Brace! 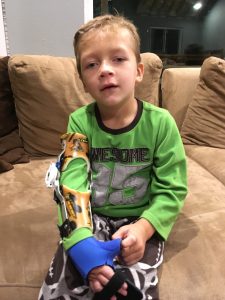 Back in June, Josiah got a new leg brace. It’s crazy that he’s almost outgrown it and ready for a new one!

In September, he got his new arm brace and a wrist/finger brace. The arm brace he calls his “robot arm” and he is to wear it at nighttime to sleep in. I was really concerned with how he would do, but he’s been wearing it 8-10 hours at night! Each week we tighten it a little more, which makes it harder for him to bend his elbow. So far, so good!

He also has a wrist/finger splint that he wears with his robot arm at nighttime. We haven’t used this yet because his muscles have been so tight he’s not able to get into it correctly.

And a few weeks ago, he got a wrist brace that also keeps his thumb out that he wears during the day. He’s great about wearing it at school. At home, not so much. He does like that it’s green, his favorite color, so that is helpful. Hopefully it’ll get better. With it being so warm, his hand gets pretty sweaty in it, so I can imagine it’s not the most comfortable. 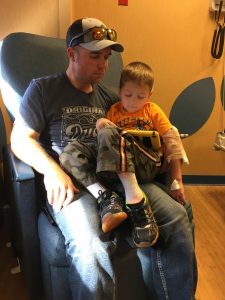 Josiah had Botox on October 17th. He did great at his appointment. He wasn’t upset in anticipation of the appointment and did great until it was time for the iv. It was hard to distract him. They had to do two pokes because the first one didn’t work. Thankfully the second one did! Once that was done he was fine.

Things were behind schedule at the hospital, so after getting the iv, Josiah enjoyed watching the iPad. His new favorite show is BibleMan, and if you see him, he’ll tell you all about it! It’s great! The sedation went well, and botox was placed in his arm for his elbow and wrist, and in his calf muscle in his leg. He was really needing botox in the leg, as he’s grown so much, his foot hasn’t been staying in his leg brace as well.

Because of the leg tightness, we decided it would be best to do what’s called serial casting on his leg. Here’s a great definition I found online! “Serial casting is the process of applying and removing a series of lightweight, fiberglass casts on an arm or leg. Every 1 to 2 weeks, the angle of the cast is changed to slightly stretch the muscles and move the joint a little closer to the correct position.”

I’m not sure yet when this will start, as the paperwork is being done and we will need to be worked into the schedule. I think this will be good, but I also dread it, as Josiah isn’t fond of being casted simply for sizing him for a new brace. Right now, he has full movement when someone stretches his leg. If he were to lose this movement, I believe surgery would be the only option, and we’d like to avoid that for as long as possible. He will have to have surgery on his leg/bone at some point, but the older he is, the better!

Josiah slept for quite awhile and when he woke up, he was ready for his pizza, chips, and chocolate milk. Then he was good to go! He even did well when they were taking the iv out. We then went to have his braces checked out, and that all went well.

We then stopped back by the hospital to get an X-ray of his hand to check his bone age. He was a champ for that!

Finally, we got ice cream! That seems to make the day much better – for him and mom and dad! 🙂