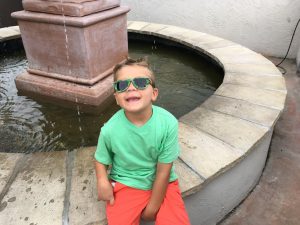 It’s hard to believe summer is over and school has started up! Josiah loves school and tells us every day, “It was awesome!” Everyone else is enjoying school as well.

Josiah has botox in the morning. (Tuesday, September 4.)  We’ll be at the hospital at 8, and sedation and botox will happen at 9:00. His orthotist is meeting us at the hospital to cast his leg while he is sedated. This will help her to get a good cast to use as a mold for his new AFO (brace). His ankle was doing really well and we were looking at not doing botox for his leg and getting a different type of brace. However, he hurt his foot a few weeks ago, which caused him to be tight again. He was unable to wear his brace for about two weeks, and that really set him back. We’ll find out tomorrow how he has been doing and what next steps will be for his leg. Doing serial casting and getting a night splint were two options that were mentioned.

Josiah will also have botox for his elbow and wrist. I think he will get casted for new braces for his arm as well. Doing botox in his elbow has provided great results in the past. We have avoided putting any botox below the elbow the last few times because it tends to not only relax his wrist (which is good,) but relaxes his fingers as well. He’s been using his hand so well for several things, holding trash to use his good hand to open the trash can, opening the door to go outside while holding an item, and to take lids off of markers independently. When his fingers loosen up, he tends to ignore his right hand all together. The plan is for him to start intensive therapy in a few weeks (insurance pending.) Because his intensive was coming up, we decided to go ahead and try the botox in the wrist.

While this is our “plan,” there is only so much botox that is allowed to be put into his body. Tomorrow we’ll talk with the doctor, who will do an exam, as well as consider input from the rest of his team of therapists and orthotist and we’ll make a decision at that time. Please be in prayer for those decisions and for Josiah. He never does great with the IV on botox days for whatever reason. Please pray that he would be calm and not be nervous, as well for his safety before, during, and after sedation. Also pray for wisdom for us and his team in the decisions that will be made.

We appreciate each and every one of you, and will update as soon as we can!