For anyone who knows me well, I am not a fan of shoe shopping.

Well, the experience has worsened! 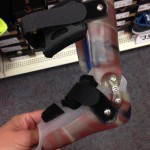 On May 19th, we picked up Josiah’s new AFO brace. (AFO = ankle-foot-orthotic) You’ve just learned a new medical term – welcome to my world!

This is Josiah’s third brace, but the first two were fairly small and surprisingly easy to fit into a normal shoe. We preferred New Balance because they offered both a wide shoe AND shoes that tied. For every children’s shoe that ties, there’s five or six different velcro options, all of which do not work with shoe inserts. 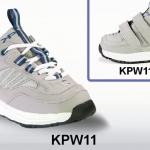 My choices in shoes are limited. But again, here’s what an AFO shoe looks like, and when we put Josiah in them, he refused to stand or walk in them. (I can’t say I blame him, nor was I disappointed to have to send them back – they’re ugly! If they worked, I would’ve suffered through having him wear them. But they didn’t; and again, I was secretly thankful.) 🙂

The next evening I headed out to the stores, with high hopes of finding a shoe that would work in this new AFO.

It was a disappointing, fighting back tears, frustrating experience. I was also exhausted and ended up with a fever that evening when I arrived back home, which helped none.

I found an online option that had worked for some individuals with AFOs, but ordering shoes online is hard to know what size to get, and then the wait time for the order to be shipped, and we need the shoes now so he can start wearing his brace.

I did end up sizing and ordering a pair to try, and even if they don’t work for this AFO, we’ll know if it’s something we want to look for the next time. And maybe they’ll work this go around…  (UPDATE: unfortunately those shoes did not work.)

After reading online I found that many kiddos with AFO braces will have to purchase two pairs of shoes – because the AFO shoe needs to be larger, but the foot without a brace would be too big…exactly the problem I was having – with the one pair of shoes I actually found that would work.

The following morning after Josiah’s therapy, I headed back into Shoe Carnival. 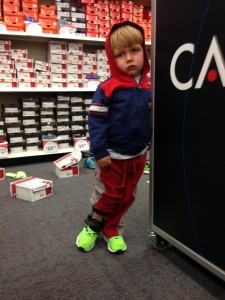 AFO and Josiah in hand, I walked back into Shoe Carnival, hoping to be able to purchase two different sized shoes and more determined to find a shoe that would work.You can see that Josiah feels the same way I do about shopping for shoes.

The employee at the front was super apologetic that the company does not allow purchasing of two different sized shoes, but that I could get a pair of shoes and get the second pair half off. He also offered to give me whatever coupons he had available to him to get the price down as low as he possibly could for my situation.

His response seemed reasonable so I headed back to the kids’ shoe section. Again. As I was working on trying to shove the AFO into different sized shoes, another employee asked if I needed help. Looking back, it was likely to assist with Josiah as he was busy pulling shoes off the shelf while I was preoccupied… :-/

Either way, he was very helpful and as I gave Josiah my phone to watch a video, we (he) worked at finding a good shoe to work. I landed on a New Balance shoe. One pair of size 8 and another size 9. And as promised, I did get a great deal on the second pair of shoes.

There was another pair of New Balance shoes I liked and thought would work, but they were not in stock in Josiah’s size.  I was able to order a pair to pick up later the following week.  I’m glad I did, because they are the shoes we ultimately decided upon.

Josiah calls them his “Spiderman shoes.” 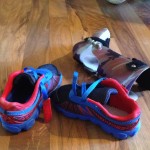 I liked several things about this shoe.  First, it was much lighter than the other pair that I originally purchased.  Second, I only had to buy one pair; a size 8!  Third, it was much cheaper, giving me the confidence to modify the shoe myself; which meant I would be unable to return the shoes if they did not work. 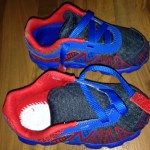 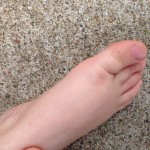 This solution worked ok, but did not provide as much support as his therapist would like, but ultimately, ended up leaving a pressure sore on the top of his foot.  If continuing to wear the shoes in this way, the sore would eventually end up as a blister, and no shoes would be able to be worn. 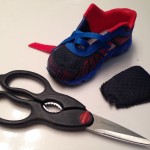 The next step required “surgery” on the shoe – cutting out the tongue.

This helped take care of the pressure sore, and made it easier for the shoe to go on and off Josiah’s foot. 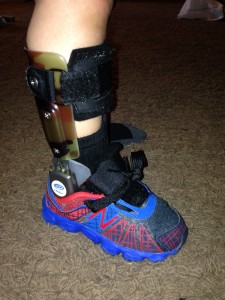 Removing the tongue did not help with providing more support, and it was still difficult getting the velcro to stay, so I ended up cutting the shoestring  out.  I added a regular black shoestring onto his shoe.  The holes were not like a regular shoe, but it seems to be working!

After several weeks of wearing the shoe, Josiah is doing great with it, and no longer requires bribery to get him to wear them!  (most of the time anyway…)