The last several days of posts have been pretty informational, intense, and tear forming. I’m ready to lighten it up a bit, and go from “then” to “NOW.”

This is Josiah now. 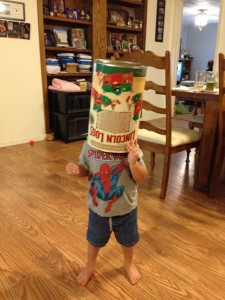 He loves placing things on his head and walking around.  Our other kids are always amazed that he can walk around without running into anything.  They don’t seem to have the knack for such things!  I think it’s because of Josiah’s limited vision that he’s able to do so well with his eyes covered. 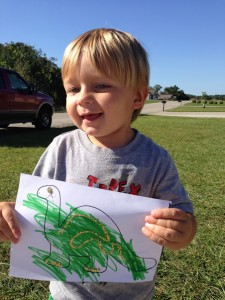 Josiah has occupational therapy three times a week.  Here’s a picture he worked on one time during therapy.  He’s super proud of it, and its currently hanging in our dining room.  He’s also holding it with both hands!  I had to help him place his hand on the picture, but he was able to keep it on there for the short time it took to take the picture!  He also has physical therapy, vision therapy, and therapy with an orientation and mobility specialist (vision).  He’s a busy little guy! 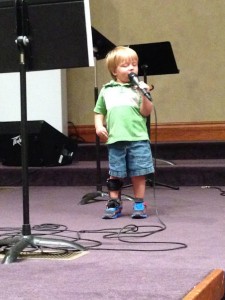 He loves to sing with his papa.  He likes to tell people “My papa is going to teach me to sing.”  He does a great job, singing ‘He’s Still Working on Me’, and ‘Pure Satisfaction’, both gospel songs my dad has helped him learn.  This picture was taken after Samuel and my dad sang at our church a few weeks ago.  Josiah waited until after church to take the stage and instructed me to get off of the stage and sit down in a chair to watch him.  He doesn’t like loud noise and is extremely fearful of applause, so I’m not sure when he’ll be able to perform with an audience like his siblings.  But he does a great job, and really enjoys it! 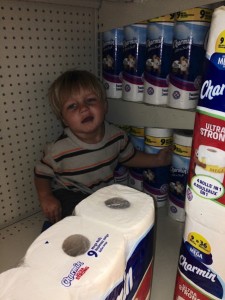 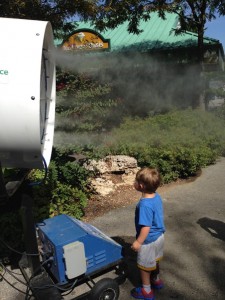 We went to the zoo two weeks ago and he really liked the misting fan.  He’d run into it and say “I’m taking a shower!”  We had to convince him we’d see more in order to get him to keep on walking to the next destination! 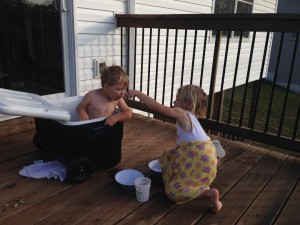 He climbs in a cooler and lets his sister feed him water from a spoon.  Doesn’t everyone?

He really enjoyed when we went outside to watch the Lunar Eclipse.  In fact, he asks at night to go out and look at the moon.  Maybe he really enjoyed it – or he’s looking for a way out of bedtime…
Actually, he goes to bed really well.  We have to lay down with him, but he’s usually the one telling us it’s time for bed!

He likes pretending to be a baby.  Here he’s being “Baby Lyndon.”  He also likes to be “Baby Margaret,” who is a baby off the show Daniel Tiger.  That’s currently his favorite show. 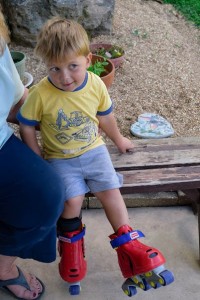 He likes to roller skate!  Thanks to my cousin Regan for the picture! 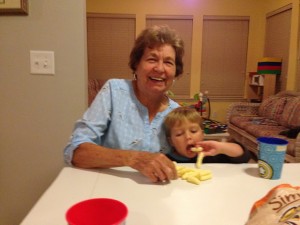 He’s a jokester.  In this picture, he just had offered his great grandma a cheeto, and when she put her hand up to grab it, he quickly pulled his hand down and shoved it into his mouth.  He even included sound effects that were “yum yum yum yum.” 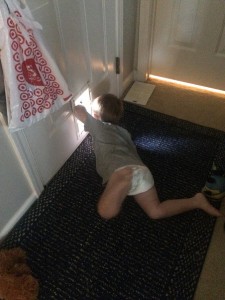 While at his cousins’ house, he discovered the cat door.  Nathan captured this picture.

He’s playing the drums with our amazing children’s minister.  He adores Mr. Mark, and most days it’s how we get him to church.  It’s not that he doesn’t like church – it’s just there’s a lot of noise and things going on.  He’s been going to his classes both on Sundays and Wednesday nights without much of a problem, which has been great!  This was taken last year, but I still love the picture.

I hope you’ve enjoyed getting a glimpse into our current lives, because I had fun sharing!  It’s not always easy and each day can bring about a whole new set of challenges, but our lives are full and we couldn’t imagine it any other way!