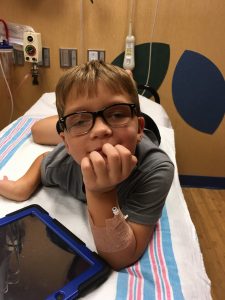 First off, thank you to everyone for all your prayers! Josiah did absolutely amazing getting the iv in his arm! There was no nervousness, tears, or stress involved, and that’s a rare thing, especially when getting botox. His doctor was shocked when she came into the room and the iv was already in – he always has a rough time on botox days. But not today!

We started the day at 3:45 in order to feed him breakfast. We had an early supper last night and he went to sleep around 7, so I didn’t want him to be starving! He was unable to eat after 4am. He ate a granola bar and some oatmeal, and took his medicine, and I was able to get him to go back to sleep with me for a bit.

When we got to the hospital at 8, he was in full ninja mode! He started to take off towards the play room, but we told him we had to stop at the desk to tell them we were here. Running down the hall, he yelled, “I’m here!” He ninja-moved his way back down the hall so they could get his vitals. When we went back into the play room, Peppa Pig was on the TV, so he sat down and watched that until it was time for the procedure. Again, he did great with that process!

Botox was placed in his calf muscle, bicep (for the elbow), and in his wrist. He was also casted for his AFO. She was able to get a good stretch for his leg, and he’ll be in a less flexible brace for awhile until he gets stretched out. 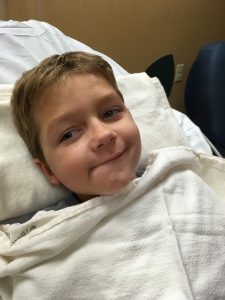 He slept for quite awhile after the procedure and casting were done. When he woke up, he had some graham crackers, milk, and pizza. We got home around 12:30. Because of the type of sedation meds he had, he came home with us instead of going back to school.

The botox takes about 10 days to fully take effect. Thursday he will go for the intensive therapy evaluations. I’m hoping that insurance approves everything and we can see great improvement with the botox / intensive therapy combination!

Again, thanks for all the prayers on his behalf! We are so thankful for you all!