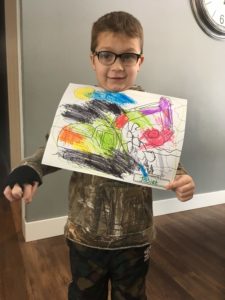 It has been great that there’s not a lot to update about these days! I looked and the last time I updated our blog was in November! We enjoyed Thanksgiving and Christmas with family, had several bouts of sickness running through our house, plenty of snow, and to be honest, we’re all just ready for spring and sunshine!

Unfortunately, this update kinda matches the grey, cold weather we’ve been having, and not the spring-feeling cheeriness that’s much more fun to write about! But, it’s not terrible news either – we’ve just moved up the MRI due to some recent concerns that can only be answered by doing a scan.

Over the past few months, Josiah has been having some headaches. We’ve visited with his primary physician, endocrinologist, and oncologist. He was referred to neurology for migraines in January. Most of his headaches were also around times of sickness, and only occurred once or twice a month, so we had just been monitoring.

At his neurology appointment, we were given instructions on how to treat any headaches that came along, and they haven’t been as painful for him, which has been nice. If he were to have four headaches in four weeks time, we were to contact neurology. In the last four weeks, he had five headaches – some likely due to having strep.

Because of this, his annual MRI has been moved up to next Wednesday, Feb 27th at 6:00pm. It was originally scheduled for May. This was our first year to move from scans every six months to yearly scans. We made it to 9 months at least!

There’s several possibilities causing his headaches – the first concern for us is tumor growth. Oncology has been encouraging, and while it is a possibility, the likelihood is not high since he’s been stable for almost 5 years.

Another possibility is due to his hormone replacement, specifically growth hormone. He’s not exhibiting the kinds of headaches he would have with that, which is encouraging. We’re working closely with his endocrinologist as well.

Sinus headaches and pressure is likely and being considered. The pain he shows is in the sinus areas. The MRI will show if sinus problems are present.

Finally, he could just be having migraines. The MRI will eliminate the other concerns, and then we can focus on what is triggering these and working to treat them.

We will not have the results right away, but will update as we find out more. Thank you, for always loving on and praying for our family. We appreciate and thank God for each and every one of you.

UPDATE: The MRI was good and he’s not been having headaches as often and is doing great!