It has been four months since Josiah’s Botox shots in his arm and hand. We noticed a big difference soon after, as he started wearing his arm/hand splints and brace, and was tolerating therapy a lot better.

In that four months Josiah has made a ton of progress!

He consistently uses his right hand to stabilize paper that he is coloring on. (Even on the floor at VBS!) 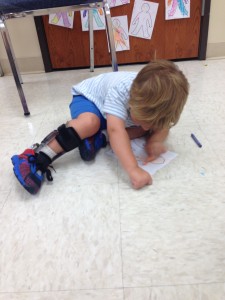 He places his right hand occasionally on the ground when he is crawling. The kids like to pretend to be puppies, which is very helpful in motivating him to crawl. I don’t have a picture, because it’s not that often, nor for a long period of time. He still prefers to scoot himself with one arm, but it’s a start! But here’s a picture of the look I get sometimes when he doesn’t want to use his other arm – and he’s holding his play dough in his right hand!!! 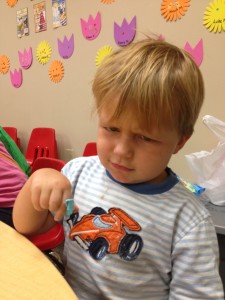 He’s starting to place the right hand on his cup when he is getting a drink! 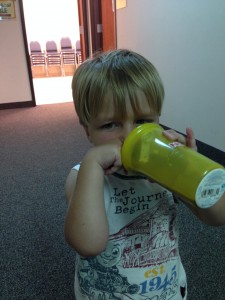 And last, but not least, he’s using both hands to pick up a ball! He’s picked up balls before by using his chin/face to help while rolling it up his leg. Now he’s initiating the use of his right arm to help! 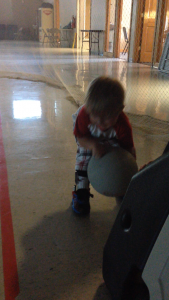 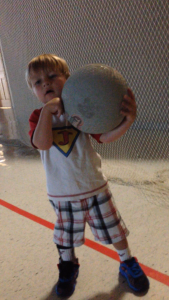 Because the Botox therapy usually only lasts around 3-4 months, we’ve noticed more tightness in his arm at the elbow and a reluctance to wear his braces and splints. That means we’re going to go for a second round of Botox on Tuesday, July 28th. I’m not real excited to spend the afternoon at the hospital and have Josiah sedated again (neither is he..), but I am super excited to see how much progress he’s going to make!