I had really hoped to post for four days in a row. I was doing so well and had great intentions of finishing up and posting last night…then Josiah threw up. So I did what any good mom would do – I fell asleep right along with him! He does seem to be feeling better tonight, and although delayed, our weekend plans will still (hopefully) go on!

Without delaying any more, I give you the final DAISY Award blog post – A question and answer session with the nurses! Thank you to Anne Kettenbrink, publications coordinator at MU Health for the questions, and again to Kathy, Kristen, and Renae for answering and allowing me to share those answers! 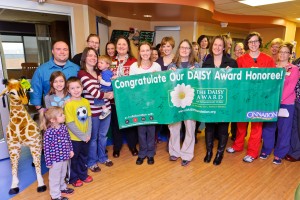 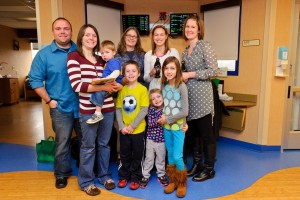 What are your credentials and your job title and duties?

Kathy: I will be with PICU for 18 years on January 4th, 2015. I am a Registered Nurse and “core” charge nurse in PICU. I am also certified in Pediatric Nursing and certified to give Chemotherapy to our pediatric patients. My duties involve bedside care and also mentoring staff and being a resource for staff and family members. I do the usual charge nurse duties such as making staffing assignments and handling any problems that arise.

Kristen: RN, BSN. I am a staff nurse on Pediatrics and float occasionally to the PICU, which is where I cared for Josiah.

What did you do to help care for Josiah?

Kathy: Josiah is a very sweet boy that has complex medical issues. He would receive a Vasopressin drip during his chemotherapy and hourly lab work which made it necessary for Josiah to be in the PICU for his weekly infusion. He is also allergic to the intravenous chemotherapy drug that he received so he was given medications before his chemo drug was administered to try and prevent an allergic reaction. Though Josiah was pre-medicated, he would still break out in hives for a lot of his infusions and I would give him extra medication to stop the allergic reaction. When Josiah had his allergic reactions it was very scary for his parents and for the nurse taking care of him, too! A lot of Josiah’s care revolved around his lab work and watching him for the allergic reaction so that it could be tended to quickly.

Kristen: I administered Josiah’s chemo while he was in the PICU. I also monitored his lab values, blood pressure, urine output, and his vasopressin drip to monitor for side effects caused by his chemo. My biggest task was keeping Josiah occupied as he needed to remain on monitors for 4-5 hours each time he was admitted. Because he was allergic to the chemo he needed, he took steroids and benadryl before treatments, which decreased his reactions but also helped him sleep through most of the time he needed to stay on monitors and in his bed…thankfully! When he was sleeping my sole job was to remain quiet enough to not wake him up! The longer he could sleep, the less time he realized he had to stay in his bed.

Renae: Ironically, with him being hospitalized after his diagnosis, I didn’t have Josiah as a patient until he was admitted for chemotherapy. I was his primary nurse for chemotherapy when he first started chemo treatments in February 2013 until August of 2013. I saw him almost every week and gave him chemo. He had several severe reactions to his chemo, so we had to manipulate the medication doses to ensure that he had safe, yet reliable treatment. I think his first reaction to it will be in my memory forever! He also had diabetes insipidus relating to removal of his tumor, so we had to monitor his I&O (Ins and outs-drinking and peeing) closely, as well as sodium levels. He had hourly blood draws and mostly hourly urinary analysis (UAs) (we got to skip the UAs when he was napping which relieved both mom and me). I loved coming to work on Mondays because I knew that I was going to have Josiah as a patient and it was going to be a good day! Now that I have a job as an instructor, I always assign a student to Josiah when he’s admitted just so I can see him and see his family. Plus he’s so cute!

How did you get to know the family during Josiah’s care?

Kathy: Josiah had to have his infusions every week on Monday. PICU only has a couple of nurses certified to give chemotherapy and I tried to rearrange my schedule to make sure that I could work most every Monday and give Josiah his chemo. Because Josiah has such complex medical issues, consistency in patient care was very important for Josiah’s parents. Josiah having allergic reactions to his medication was also an added stressor. To have a different nurse every week that had to learn his chemo, etc would have been difficult for the family that was already under a lot of stress having an ill child. Rearranging my schedule to help keep consistent care for Josiah was a pleasure as this is a wonderful family! I did get to know Josiah and his family very well and I feel his parents learned that I could be trusted to take the best care of their child as possible and to watch for his reactions and act in the event he did react adversely. There is a bond that develops and Josiah and his family became a part of our PICU family.

Kristen: Josiah and his family became a part of my family. I spent 8-10 hours with them each week. With all of the necessary care for Josiah, I was in his room for the majority of this time. We would talk at lengths about Josiah’s therapies, what fun things their family was doing at home, and they knew every fun story there was to know about my daughter. Some people don’t see even their good friends weekly, and I saw them every Monday! It was amazing to watch Josiah grow and overcome some of the obstacles that his treatment and diagnosis put on him. It was also amazing to watch how strong Amy and Nathan were through this whole thing, they are sure an inspiration!

Renae: His parents are amazing! One of them was always there, and most of the time it was both of them. They always asked great questions and were very involved in his care and cognizant of every aspect of his treatment. They did a great job in a very stressful situation!

What does it mean to you to be recognized?

Kathy: It means the world to me that Josiah’s family recognized me for my care. It is the utmost honor to have a family say they appreciated all I did for their son. It was not always “smooth sailing” as Josiah is a toddler that did not want to get his chemotherapy, blood draws, be hooked up to the IV pole, or to be in the hospital. He would cry out that he did not want to stay as soon as he came through the doors into PICU. Josiah is a typical toddler that lets his opinions be heard! For Josiah’s parents to have nominated me means they trusted me and wanted me to care for their child. Pretty impressive!

Kristen: It means so much to me to be recognized. Being thanked by a patient is what this job is all about. And the letter that Amy and Nathan wrote still brings tears to my eyes. Josiah is such an amazing boy that affected by life so much, it is so sweet to know that I had such a large impact on them. This is why I continue to do what I do. It is all sure proof that the little things matter.

Renae: It’s an honor to know that even in a sad situation, we have touched this family’s lives in such a positive way. I’m sorry that he was diagnosed with cancer and had to go through treatment, but I am so glad that I got to be a part of it at the same time!

The nomination mentioned the water bucket and toys. What kinds of things did you do for Josiah to try to keep him occupied and happy during treatments?

Kathy: Josiah loves to listen to his grandpa sing, and his mother has some recordings on her phone that she would play as a distraction when Josiah would start to get upset. Grandpa’s singing was very comforting to Josiah and he loves his mom’s phone! She also rocked him frequently and would assist me in getting blood work, vital signs, etc without Josiah noticing so much. One of Josiah’s favorite things to do was to walk in the hallway or ride in one of the little cars that Child Life has for our children. His parents became experts at maneuvering his IV pole and keeping it from pulling on his tubing connected to his central line through Josiah’s frequent changes in direction down the hall. Josiah became a favorite with all the staff and pretty much anything that made him happy we would do for him.

Kristen: Every Monday I would get to work and set up Josiah’s room before he arrived to PICU. In addition to the emergency equipment, IV poles, and other medical things needed for him it was just as important to include a wagon and cozy coupe car in Josiah’s room along with some trucks in his crib. Usually, Josiah would sleep through the morning session of his treatment as he had to wake up before 6am to get to the hospital. But as soon as he woke up he would point to the door and say “bye-bye”. His mom spent hours walking the hallways of the PICU with Josiah in the wagon in order to keep him occupied. He also loved the stuffed giraffe that is at the doorway of the unit and called it “my dog”. He would crawl under it, over it, hug it, and kiss it every time he travelled past the Unit Clerks desk with his mom patiently untangling IV lines and keeping up with IV poles. Sometimes it wasn’t even what we put in the room for him to play with that was entertaining, but simply the crib itself. He would crawl under the crib and lay down, laughing as I would come in to look for him and make a big deal about not being able to find him.

Renae: He was in the hallway A LOT! He hated his room and loved to walk around, which meant Amy or Nathan had to chase after him with his IV pole. It was actually comical at times! Child life was excellent with his regimen and would bring toys for him too. I think the water buckets was actually their idea!

Is there anything else you would like to add?

Kathy: Towards the end of Josiah’s treatments he learned how to say “Kathy” and he would say my name sometimes when I approached his bedside. I always liked this as most of the time Josiah did not act like he wanted me near him, he would mostly shoo me away! Josiah came to visit PICU several months after his chemo had been completed. All the staff very happy to see Josiah and as every one gathered around him, he walked past everybody and came right to me and gave me a hug and sat in my lap. I was very proud that he chose me out of all the staff! It told me that Josiah appreciated all that I had done to help him get through a very difficult time in his life. This nomination by his family means that to me, too.

Renae: Josiah and his family are amazing, and I know that his treatment has been difficult! Thank you so much for this nomination! It truly is an honor!